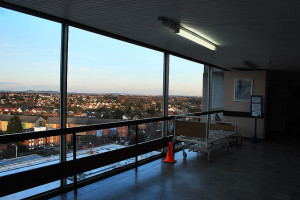 North West London is "almost certain" to lose some of its hospitals.

Mark Spencer, a director at NHS North West London, says that the group – which covers Brent, Ealing, Hammersmith & Fulham, Harrow, Hillingdon, Hounslow, Kensington & Chelsea and Westminster – have to make £1bn savings over the next four years from its annual £4bn budget. He told the BBC

Which sounds brilliant! More beds means shorter waiting lists, a hospital nearby means easier access if you're old, immobile or have an emergency! But wait:

And that's an inefficient system.

An NHS North West London report says care at their hospitals is inconsistent and that the "patient experience is generally poor". So the plan is to rationalise facilities and create more specialised hospitals.

It's likely that A&E departments will also close and, while it's tempting to pin this all on Health Secretary Andrew Lansley's controversial and incredibly unpopular NHS reorganisation, at least five of the area's eight A&Es were under threat two years ago.

Photo by Adam BRI Smith from the Londonist Flickr pool