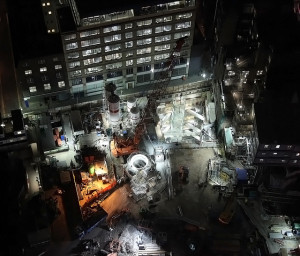 Here's what the Back Boris website says about Crossrail:

After years of inaction under the previous Mayor, I’ve started to build Crossrail and ensured it will be delivered in full.

The new rail network is also wheeled out to answer the question of 'what has Boris Johnson done for us?' in areas like Ealing, Redbridge and Hillingdon. But how much was Boris actually responsible for?

Well, if we're talking about getting the thing built in the first place: very little. The Crossrail Bill went before Parliament on 19 July 2005 – a vote that, awkwardly, the then MP for Henley didn't attend – then spent 21 months in a Select Commitee (hearing 205 objections). The first reading in the Lords happened December 2007, then there was a Lords Select Committee in February and March 2008. By the time Boris took office on 4 May 2008 it really was all over bar the shouting; the Bill was signed into law that July.

Where there might be more room to claim success is in saving Crossrail from the Coalition's harsh cuts. On 27 May 2010, the Evening Standard quoted a TfL source

The Mayor is in there [meeting with then Transport Secretary Philip Hammond] now making the case for continued investment in London's transport network, including Crossrail.

Rumours flew that Bond Street or Tottenham Court Road would be shelved and that the spurs to Abbey Wood and Maidenhead could be kissed goodbye. However, the same Evening Standard article quoted Hammond as saying

Our challenge is to deliver Crossrail as it was designed at the lowest possible cost.

This story is just pure speculation... Any delay to the project would actually increase costs.

Private funders, who put £3.5bn into the Crossrail pot, also warned that their finance hinged on it going ahead as planned. In the end the scheme saved money by redesigning some stations and using existing train designs. We'll probably never know exactly what happened in those meetings or how hard the Mayor needed to fight; but with ground already broken on several sites, we don't think Crossrail was ever in serious danger of being scrapped or scaled back.

While it's true that all construction has happened on his watch, be wary of any grandiose Crossrail claims coming out of the incumbent's camp.

Seen a campaign claim you want us to look into? Email us at tips@londonist.com. Photo of Tottenham Court Road by david.bank (www.david-bank.com) from the Londonist Flickr pool.