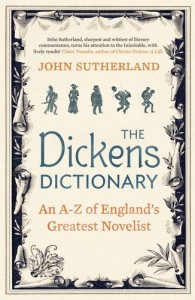 This whole Dickens 200th anniversary thing is starting to feel a little over-saturated — to the extent that every review of a new Dickensian adaptation, or book, or film, or exhibition or mobile app is obliged to observe how over-saturated this whole Dickens thing is. Step forward John Sutherland whose crackling little book is a surprise antidote to Dickens ennui.

Presented as an "A-Z of England's greatest novelist", the book is really one big excuse for Sutherland to share his favourite theories and facts about Dickens. That the book opens with an A for 'Amuthement' and ends with a Z for 'Zoo Horrors' will give you a good impression of the author's eccentric approach. This is a book built to entertain, but underpinned by a long career of scholarship. Sutherland finds his subject an 'inexhaustible fund of entertainment,' and bends that spirit onto his own pages.

Just a few examples... Under 'C', we learn of Dickens' attitude to cannibalism. 'H' for Hands paints Great Expectations as a 'masturbator's manual'. 'B' for Blind Spots discusses the mysterious lack of Irish people in Dickens' novels, and the total absence of that other iconic figure of the age, Queen Victoria. Not many authors could confidently begin a chapter by saying "I believe I was the first to point out a teasing puzzle in Great Expectations..." (a hattery matter), or get away with comparing Dickens to Michael Jackson's doctor.

Sutherland is clearly a man who knows his subject so well that he's able to play games with it. The result is a joyful dance of a book that even the most jaded Dickens reader will relish.

The Dickens Dictionary by John Sutherland is out now from Icon Books. Buy here.