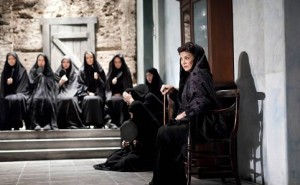 “To be born a woman is the worst punishment.”

Well, it is if you’re one of Lorca’s women. Trapped by the constraints of a society governed by men, where honour, tradition and reputation are paramount, they are second-class citizens, little more than chattel. This is one of the reasons Emily Mann’s new version of Lorca’s 1936 play, which transposes the action from Andalusia to modern-day rural Iran, works so well.

Bernarda Alba is the fiercely proud matriarch who imposes a sentence of eight years of mourning on her five daughters after the death of her husband. Confined to the house, cut off from the outside world – except the eldest, who is engaged to the village stud (nothing to do with her having inherited all the property) – the daughters, aged from 20 to 40, are prisoners. Holed up together in the stifling heat, the tension in the house builds. The fact that most of the sisters are in love with aforementioned stud doesn’t exactly help matters. We can practically feel the heat emanating from the veins of these desperate, sexually starved, lonely women. And director Bijan Sheibani carefully fosters the claustrophobic atmosphere of this pressure cooker of a household, the tension growing and growing until it implodes in an inevitably tragic finale.

The entirely female cast proves impressive. Of the five sisters, Amanda Hale stands out as the jealous Elmira, twisted with grief and quietly defeated by past losses. Jane Bertish is wonderful as the tough old housekeeper, Darya, almost a match for her imperious mistress Bernarda; played by Shohreh Aghdashloo, who brings a flamboyance and deadly fieriness to this dictatorial woman whose overweening pride and snobbery bring about the devastation of her family.