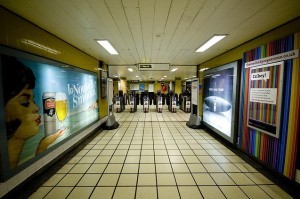 London Underground are failing to keep their promise of maintaining staff on stations when ticket offices are closed, London Travelwatch has found.

Last February LU reduced opening hours at a number of ticket offices where demand was slow. TfL told us in December 2009, when the plan was first mooted:

We don't intend ever to run stations with nobody on them. I want people on the gatelines and on the platform.

So when London Travelwatch started getting complaints from tube users of unstaffed stations they arranged a series of 'mystery shopper' visits. Just under half the stations had no visible staff on the gateline; sometimes unstaffed gates were left open – allowing the possibility of fare dodging – but on 21 occasions researchers found the gates closed and nobody around to offer help in case of a problem.

does not recognise the picture... Our independent research shows LU staff are present in ticket halls in 98% of visits

London Travelwatch's report also found that, weirdly, some ticket offices are open when they're supposed to be closed, and criticised inconsistent information signage and train information displays. On the other hand, they always found a working ticket machine and stations were clean and graffiti-free.

Another small detail that we found interesting: waiting times at ticket machines were sometimes noted to be longer than guidelines given to suburban rail operators. An anecdote on page 23 about people queueing at London Bridge on a Saturday afternoon (waiting times longer than standards, even after people gave up and left the queue) will be familiar to anyone who travels that way.