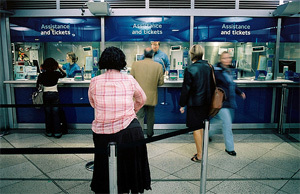 Image by edscoble from the Londonist Flickr pool
The RMT are claiming LUL have plans to close ticket offices at 144 tube stations by April 2010, presumably in an attempt to find the £5bn savings they need. Under the proposals, only main terminals would keep a full ticket office function and the offices that survive going machine-only would be open just at peak times.

We've not seen this document - indeed, judging by Boris's response at this morning's London Assembly meeting, neither has he; surprising for the Chair of TfL - so we should tread carefully. But given that, in his election manifesto, the Mayor pledged he'd be "halting the proposed Tube ticket office closures, and ensuring there is always a manned ticket office at every station", we'd be surprised and disappointed (furious?) if this turned out to be true.

Staff on stations are not just useful for buying tickets, they're often essential for finding out information and they contribute to the safety of passengers. It's the quieter stations that are the most likely candidates for ticket office closure; by that very same rationale, they're also the ones that are dodgier. And it's the scale of the proposals that stagger us: no staff on over half of the entire network, and only occasionally on the bulk of the rest. Don't be surprised if strikes are called - but this time, we think the unions have a point.

"We are also committed to staff on all of our stations throughout the day to provide the best possible service for our customers. As we've said before, given the current economic climate and the need to be ready for the changes that will arise when the Tube upgrades are delivered, we are looking at how we can be best organised to provide that service. This work is at an early stage and no decisions have yet been made."

We wouldn't say that's an unequivocal promise to keep ticket offices open... "staff on the stations" could easily mean one bloke stuck in an office somewhere. As so often happens with leaks this is going to be a game of "he says she says" until someone produces an actual document.