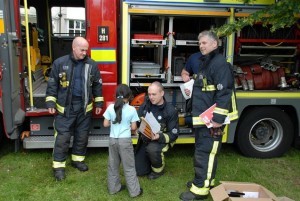 How does burnt toast cost London money? When it sets off the smoke alarm at your office and the automated system calls out the fire brigade, that's how. By cutting back on incidents like this, London Fire Brigade have saved £9m over the last four years.

There's still a false alarm or hoax call every 10 minutes on average, which the LFB reckon costs £37m a year. Taking a nerdy look at next year's budget, that's almost as much as the expected earned income for the whole year, which is crap.

While we're talking money, the London Fire and Emergency Planning Authority last week suggested combining fire and ambulance services in a bid to save more cash. Moving 50 of London's 70 ambulance stations into nearby fire stations, bringing them under the jurisdiction of the Mayor, could save £50m. London Ambulance Service, however, has said it needs to remain part of the NHS and that, like, thanks and everything, but no.

To get an idea of the Fire Brigade's work, take a look at their Bonfire Night live tweets from last year.