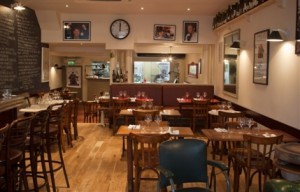 Following in the footsteps of older sister Terroirs, Brawn opened on Columbia Road just over a year ago to critical acclaim and a giddy amount of cool credentials. We certainly loved it.

We were therefore excited for the birth of offspring number three from this group, which has added ‘natural wines’ to the vocabulary of London’s restaurant goers, and done more for nose-to-tail eating than anywhere since St. John.

Adding to Terroirs’ touristy West End location, and Brawn’s trendy East End spot on Columbia Road, the brand is working towards a complete compass with the arrival of new southern outpost, Soif in Battersea.

The locals have clearly adopted their new neighbour, with a weekday visit last week showing off a classy clientele of adventurous meat eaters which many more central restaurants would slaughter for in January. They’d probably also put a fair bit of effort into poaching their staff, who are adept at stirring up hungry anticipation for what’s to come with explanations of some more unusual dishes (there’s a slightly tedious tendency to French titles), and providing a mini tableside masterclass in the available wines, which is helpful given the options head into the hundreds.

We start with a selection of small plates which includes the renowned rillette. It’s not as if we haven’t had it numerous times before at both Terroirs and Brawn, but we felt that in the name of giving you accurate information we ought to check it tastes the same in new surrounds. And we bloody love its fat drenched, melt-in-the-mouth sinfulness, which we can confirm is just as racy sud de la Thames.

Some constantly replenished sourdough, a platter of hams including the unctuously oozy cured fat that is Lardo di Colonnata (no, you’re right – Londonist certainly isn’t on a diet) and an oyster or three again repeat highlights from the other two restaurants, but a selection of bigger dishes are entirely their own thing.

A dish of veal head is less scary than it sounds, consisting of a chunky slice of meat in a rich, herby broth showing off the tender cheek along with more gelatinous but full-flavoured parts which we very scientifically call the tendon-y face bits. A simple dish of clams in a butter and garlic sauce is equally well-executed, demonstrating Soif’s clear intentions to show off great produce rather than play around with it too much. With small dishes from £6 and mains from £13, it’s undoubtedly good value too – perhaps even slightly better than at the other two restaurants – especially when you take into account the fact that the small plates really aren’t that stingy at all.

Plates of cheese; a dense, moist Italian cake made with chestnut flour; and a more British ginger pudding with rhubarb and custard provide a pudding choice fitting of the eclectic dishes on the rest of the menu. And perhaps thinking we’d been quite greedy with our mains, our waiter brings us a couple of complimentary glasses of dessert wine that have been matched to our selections – now that’s the kind of service you want from your local. Let's hope those who reside nearby know just how lucky they are!

Soif is at 27 Battersea Rise, SW11 1HG. If you’re not sure what the name’s all about, you obviously didn’t pay much attention during French GCSE...