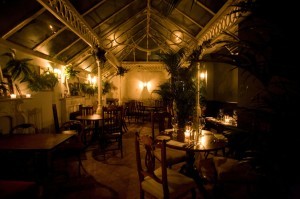 With a name like Powder Keg Diplomacy, this is one neighbourhood bar that’s out to make an impression. After all, it’s a fairly bold statement to name a venue after Britain’s imperialist glory days when we truly ruled the waves and used mass force to gain territory in a real-life game of Risk.

With this brutal mentality summed up in the title, it’s reassuring to know that the trendy space on Battersea’s St. John’s Hill which the restaurant occupies was rightfully and lawfully acquired, rather than being captured during the recent Clapham Junction riots.

In fact, the company responsible for the opening is something of a military operation itself, incorporating the restaurant-cum-bar-cum-club collective that is The Lost Society, The Blind Tiger, The Lost Angel and Citizen Smith, all scattered across London’s SW postcode area.

If an undisputed air of coolness and a focus on mighty quaffable cocktails are signature of the group, then this latest venture is in the same vein. Military paraphernalia, Victorian knickknacks and patriotic wall claddings reveal an interior designer gone characteristically overboard, and the waistcoat wearing staff uphold the group’s theatrical touches.

It’s the restaurant facet of Powder Keg which is where the ante is upped. Bar snacks and gastropub grub is elevated into a more fine-dining environment thanks to a plushly decked out conservatory out back. Whilst you may be preoccupied with the thought of Colonel Mustard marching in with a candlestick, you’ll want to pay full attention to the food, which sees defiantly old-school offerings such as melba toast given an overdue outing, this particular relic making an almighty accompaniment to a seductively smooth and creamy duck liver terrine.

A three-bird roast amalgamating duck, goose and partridge hovers somewhere between Hugh Fearnley-Whittingstall and Mrs Beeton, served here with all the winter trimmings, a herby Cumberland sausage stuffing and a rich sage gravy. An utter triumph and certainly not a drop of jus here.

And what could follow this better than a gooey, date-studded sticky toffee pudding or an all-British cheeseboard? And how about washing it down with a dessert beer or a bottle from the ‘friends’ and ‘foes’ wine lists, organised depending on the countries’ colonial positioning?