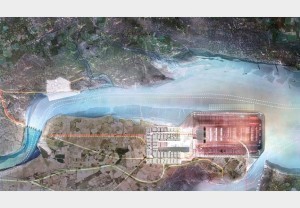 Barely a week seems to go by without a mention of the Thames estuary airport plans and lo, we have a report that the government will hold a consultation on it later this year.

Architect Norman Foster outlined some fairly ambitious plans for the fabled Boris Island while the mayor has long been an enthusiastic supporter of the idea, presenting the economic case for it last November. But as the estuary region falls outside the mayor's control, government backing would be necessary to push ahead and, despite the Prime Minister's admittedly cautious committal to consult, it remains a huge project in terms of cost and environmental impact. The latter was the primary reason for the conservative government's blocking of plans for a third runway at Heathrow and campaigners say the effect of an airport on the estuary would be devastating. Among the airport's detractors are Medway and Kent Councils, backed by the RSPB.

Despite the potential £50bn cost, the mayor seems unconcerned about funding, telling BBC Radio 4's Today programme he believed cost was not an issue and there would be plenty of sovereign wealth funds willing to invest in the project — in a 2008 feasability study, he also stated that the airport would not be funded by the taxpayer. Announcing ambitious transport infrastructure ideas closely followed by assurances that no public money will be involved appears to be a favoured tactic of Johnson's and one which may endear him to voters counting the cost of the Olympics.

Deputy PM Nick Clegg opposes the airport, as does Caroline Pidgeon, Lib Dem AM, who is cynical about Cameron's support, calling it:

“An initiative by Conservative Ministers to give credibility to Boris Johnson’s discredited idea of a Thames Estuary airport ahead of May’s elections. This idea remains a fantasy proposal from a Mayor who should be focussing on London transport."

The consultation will be announced in March. You can read the proposals here.