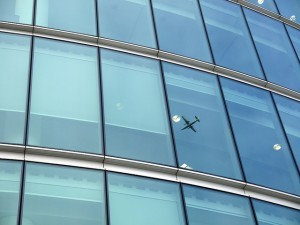 It's the infrastructure development idea that won't die: the Thames Estuary airport received a boost from Boris Johnson today, after he made a speech outlining the economic case for the proposed air travel hub.

In an article for the Standard, the Mayor makes the point that Heathrow is serving fewer destinations than it was ten years ago, and other European hubs - Paris Charles de Gaulle, Amsterdam and Frankfurt among them - are serving far more routes. However, to cite Paris CDG's 56 weekly departures to Brazil (compared with 27 from Heathrow) as a reason why Brazilian inward investment to France in 2009 was $800m, with just $1.7m was invested in the UK, is perhaps a tad simplistic. Brazil and France have strong diplomatic ties, and in 2008 formed a strategic alliance (use Google Translate on that page). Relations between Brazil and the UK don't even merit a mention on Wikipedia (which is clearly the best way to measure these things).

There are also probably other mitigating factors for why France and Germany attract more Chinese tourists than the UK (relative country size?) than pure airport space. We're sure it's a factor, but we'd like to see some more data first please. We'd also add up all the different destinations served by London's five airports to see how the numbers compared with the continental hubs, as opposed to focusing on Heathrow alone, but we suspect we'd lose the will to live before we finished.

Norman Foster has come up with plans for an Estuary airport, which he claims would be self-funding, but there are still strong objections on environmental grounds from the RSPB and local councils. Even Ryanair boss Michael O'Leary, who loves fantastical plans to raise money, reckons it's baloney and London would be better served by building runways at existing airports. But this was one of the first things ruled out by the Coalition when they came to power. There doesn't seem to be any consensus on what to do about the south-east's crowded skies.