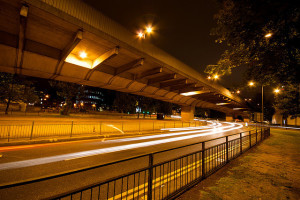 Good news for Megalon and other fans of drilling holes, Mayor Boris Johnson has suggested the Hammersmith Flyover may eventually be replaced by a tunnel when it is pulled down.

The unloved structure is currently partially closed after a whistleblower sparked an investigation over Christmas which worryingly found that some cables had snapped, raising questions over its ability to handle its usual load of 90,000 vehicles a day. Subsequently the flyover has been limited from four lanes to one lane of traffic, making driving in the area a nightmare for commuters (do people actually have nightmares about traffic jams?).

This year marks the 50th anniversary of the bridge's construction but politicians seem in little mood to celebrate. Nick Botterill, deputy leader of Hammersmith and Fulham Council said that “local people need to be at the heart of the debate about the long-term replacement for Hammersmith flyover.” Kicking the flyover when it's down, he also dubbed the structure an “elevated monster” that was “ugly and outdated.” Presumably he went on to say it had bad dress sense, was a poor listener and didn’t even know what dubstep was.

The Mayor spared the flyover's blushes somewhat, by stressing that repairs currently being made to the bridge will add another 15 years to its use. While the priority is to get the structure back to full capacity in time for the Olympics, Boris entertained the future idea of a “tunnel, which would provide the great benefit of freeing up around 900 metres of land.” Which coincidentally is the same length as a Victory II-class Star Destroyer – is the Mayor planning construction of an intergalactic vessel to go with his new Routemasters?

Click here for a detailed explanation of the flyover's "ingenious design", and the reason for its current woes.

Image by larkery via the Londonist Flickrpool under a Creative Commons License.