Should The Hunterian Museum's Giant Skeleton Be Buried At Sea?

By M@ Last edited 127 months ago
M@ Should The Hunterian Museum's Giant Skeleton Be Buried At Sea? 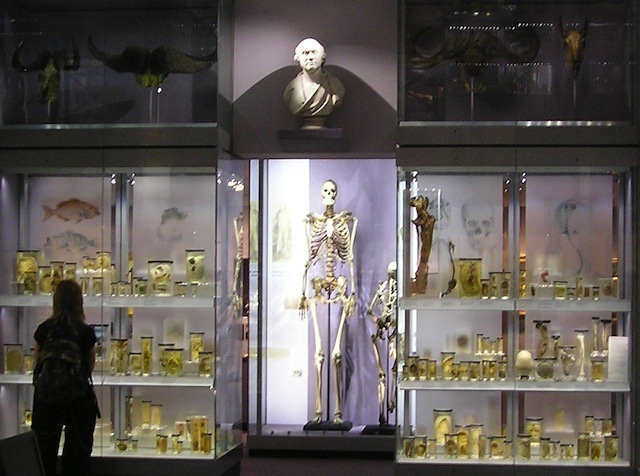 Anyone who has ever visited the Hunterian Museum in Lincoln's Inn Fields will remember this one exhibit. The skeletal remains of Charles Byrne, the 'Irish Giant' who stood 7' 7'' tall, are something of an unofficial mascot for the anatomy museum, as the mal-stuffed walrus is for the Horniman Museum and that weird jar of moles is for the Grant.

But now there are renewed calls for the skeleton to be buried at sea. It's a tale of 230-year-old last wishes, corpse robbing and the grey area between science, education and morality.

Because of his great height, Charles Byrne's frame was an object of curiosity for 18th Century anatomist John Hunter. The famous surgeon had an equally famous collection of medical curiosities, and the giant must have looked like the ultimate trophy. Byrne left specific instructions that, upon his death, his body should be buried at sea, so as to avoid Hunter's attentions. But the prize was too great. When Byrne died aged just 22, Hunter bribed his wards and seized the body.

The remains have been on public display ever since, and have attracted occasional objections from those who think Byrne's wishes for burial should be met, even now. The campaign gained added weight this week from a paper in the British Medical Journal. The authors claim that all possible medical insights from the skeleton have now been gleaned, including a DNA extraction. They call for the remains to be buried at sea as a celebration of the unfortunate man's life and the posthumous role he's played in advancing medical knowledge.

It seems like a wonderful idea — that society might still care about, and eventually honour, the wishes of a man who died 230 years ago is a credit to human morality. But there's a thorny, practical side to all this that might get messy for London's museums. How many other specimens in Hunter's collection might hold similar claims? What about human remains on show elsewhere? The mummies at the British Museum were not only disinterred from their rightful resting places, but also transported to another country. If we lose Byrne, do we lose them too, and what would that mean for museums' educational remits (and budgets, come to that)? Honouring the wishes of someone who died a quarter of a millennium ago could open a can of worms, if not a jar of moles.