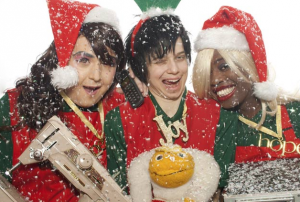 Imagine a live interactive version of Are You Being Served? crossed with a night trapped on the set of shopping channel QVC and you're halfway to envisaging Duckie's Copyright Christmas.

As the song goes, Christmas is a wonderful time of year for cynics everywhere who happily point fingers at commercial crassness, irreligious revelry and the soft-drink inspired Santas plastered on every flat surface. Duckie, a theatre company with a cabaret twist, have gone past pointing and have instead stuck their middle one up in a brilliantly creative way.

Set designer Robin Whitmore has put together what amounts to an Ikea trek through a bizarre bazaar of set pieces which, in between the staccato ennui of queuing, constantly question, poke and prod the audience. The promenade takes us past boxes labelled Sloppi, Papp and Slappdash as we step into a series of new experiences much like unwrapping presents on Christmas Day. Amongst the ten different areas, you can evaluate your own self-worth, smell BoJo's new perfume and buy yourself a new job as well as considering the effects of the festivities on more serious areas like finance and recycling.

A brave move in these recessionary times, Duckie has brought together a large cast of twenty (count 'em) talented folk, not least trans provocateur Scottee as store manager Carol, actor and performance artist Dickie Beau (who is excellent as the outraged child on Santa's knee) and the world-record setting acrobat Jess Love who, appropriately enough, talks to us about "our flexible friend".

Much like the high street shops, we can't give too much away but while some might say that Christmas is a desperate farago, an annual one-month stand that titillates, teases and promises more than it delivers, here is a show which takes that thought and converts it into a gloriously OTT satire which is by turns intelligent and hilarious.

Londonist attended at the invitation of The Barbican.