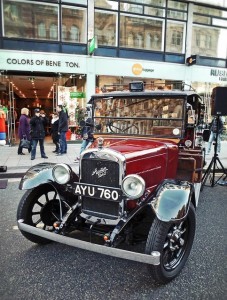 It's good news if you're after a bargain but bad news if you're already considering hoarding canned goods for an economic apocalypse: the first day of Oxford and Regent Streets' traffic-free weekend enticed shoppers to part with £180m, 10% less than on the same day last year.

We were actually stupid enough to venture out into central London's shopping mecca yesterday and were surprised at the lack of crowds. Sure, a French family nearly felt the force of our wrath outside House of Fraser, but in general it was possible to, you know, move out there. Stores are discounting by up to 50% and, despite the fall in comparison with last year, shoppers actually gave retailers their best weekend so far this year — and more than the £150m the New West End Company forecast.

We're not sure whether this VIP Weekend stuff actually works though. Is it really necessary to hold a funfair in the middle of Regent Street to entice people to the most famous shopping area in the country two weeks before Christmas? Or do the buses and vintage cars parked outside department stores actually just create more immobile groups of gawpers to navigate?

Photo by buckaroo kid from the Londonist Flickr pool