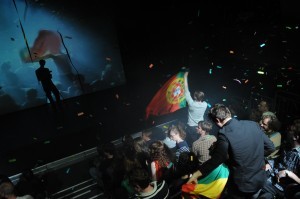 If you are planning on watching ‘Audience’ at the Soho Theatre then we suggest you stop reading now, click back to the home page, check Facebook, because the more you know about the show the less powerful it will be. And yet if you are planning on watching Audience you will no doubt already have an idea about the show, a sense of what might await you in the theatre. Audience has now been so widely debated since it was praised and vilified at Edinburgh festival, that there is a danger of destroying its potency.

Ontroerend Goed’s new show begins by reiterating the ‘rules’ of being in an audience, we’ve all been here before, we know what’s expected of us. But soon a camera is trained on us, our faces spread large across the stage and those who are meant to be the viewers become the viewed. What follows is an exploration of crowd mentality, a pushing and pulling of our sympathies to those around us. Our possessions are rifled through, our clothes paraded and things turn really nasty as one individual is victimised and insulted.

It’s this moment which has become the show’s infamous talking point. The abuse of this audience member, always an attractive female, is a provocation to the audience. Will you let this harassment continue or will you stand up for one of your number? It is a brilliant idea and yet it now feels a little deflated, most the audience know it's coming, or something similar, and it’s therefore difficult to discern a genuine feeling of shock amongst the crowd. We have come braced for conflict and it doesn’t take long for one audience member to leaps to the young lady’s aid.

Yet it’s in the moments which follow, where we are asked to dance, to cheer to throw our hands in the air, that Audience really begins to work. By turning around to view the audience it's clear to see there are curious pockets of people enjoying themselves while others sit stern faced. There is a current of feeling dividing and uniting the audience. And it’s this turning, the process of looking back over the audience which is the show's greatest success, for at its heart Audience explores the paradoxical feeling of being an individual within a crowd.

Audience might be a victim of its own notorious success: the show which once shocked and provoked responses that it was unethical is now a little hamstrung. But it’s still a hugely fascinating show which asks questions about crowd mentality, the exchange between performer and audience, and what it means to be an individual.

Audience is at the Soho Theatre until January 7th. Tickets from £12.50