London Dungeon Skeleton Turns Out To Be Genuine 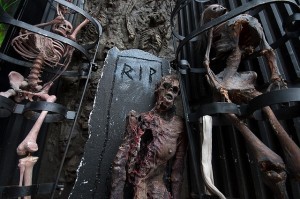 Another week, another skeleton unearthed in London, this time not from the closet of a cabinet politician. A body in the London Dungeon has turned out to be real!

Recent tests performed on the supposed model skeleton revealed the remains to be genuine. Furthermore, the body may have been on display ever since the Dungeon opened in 1975.

The remains of a back-bone and rib cage have, in the Dungeon’s tasteless fashion, been named “Kate,” after famously waif-like model Kate Moss. Another skeleton “Twiggy” — arf arf — is also due for testing after looking suspiciously realistic.

Apparently the skeleton was sent for testing only after staff learned that displaying a real skeleton requires a £2000 license from the Human Tissues Authority, a institution that sounds straight out of a David Cronenberg movie. It also helps that the Dungeon has a new attraction to announce — the skeletons were set to appear in December’s Satan’s Grotto display.

From the remains it appears the skeleton was put together in the 1950s. Catherine Pritchard of the London Dungeon suggested the bones “might date back to the early days of anatomical research when bodies were regularly smuggled in from the Far East for dissection”.

Last year also saw the discovery of a half tonne whale skeleton unearthed during excavation work in Greenwich. Tests have yet to reveal if the two were related.

Never ones to shy from a ludicrous press release, the discovery follows the Dungeon’s launching earlier this year of the UK’s “first 5-D laser ride”.