A Splendid Soundmap Of London's Waterways 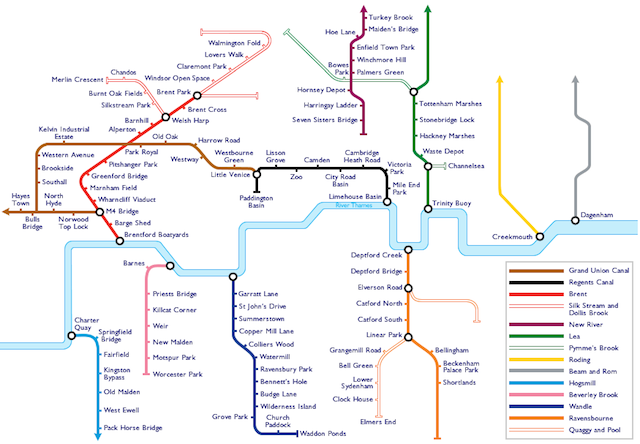 London Sound Survey is a truly extraordinary site. Truly extraordinary. No hyperbole or exaggeration. It patently deserves some kind of award for outstanding achievements in the field of excellence.

Site owner Ian Rawes has spent years compiling audio recordings from around London – from street sounds to the clicks, whistles, squarks and hoots of the capital's wildlife. It's a priceless archive of the sounds of the city...an aspect often overlooked in our camera-obsessed society.

Most splendidly, Ian has found imaginative ways to present his recordings. We're particularly taken with this Tube-style diagram of London's waterways. As well as following the Regent's Canal, Grand Union Canal and their offshoots, he's also tracked the various surface rivers of London such as the Lea, Wandle and Brent. Representative sound recordings have been made at regular intervals along each route, and embedded into the diagram. Click on the map above to visit the interactive version.

The Waterways map is just one of many addictive sections of the site. A recent update added a number of historical recordings, including a fascinating snippet from Speakers' Corner in 1937 (religious talk goes down surprisingly well), and a couple of street performers from the previous year.

See our long list of other alternative tube maps.