Theatre Review: Reasons To Be Pretty 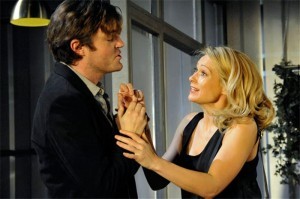 Reasons To Be Pretty is the final instalment of a trilogy from Neil LaBute – following The Shape Of Things (2001) and Fat Pig (2004) – that concerns society’s obsession with physical appearance.

A furious opening kicks Michael Attenborough’s production straight into gear. A young woman is screaming at her boyfriend with a ferocity that suggests she has just caught him slapping her puppy across the face. But he is not the pet-abuser here, and her rage signals that the lives of his goldfish are in immediate danger.

The trouble starts when 20-something Greg tells his best friend, Kent, that, though his girlfriend’s face is just "regular" – compared to that of the new girl at work – he wouldn’t trade her for a million bucks. A compliment, he thinks. Hm… Well, Kent’s wife, Carly, doesn’t think so; she overhears and repeats his comment to said girlfriend, Steph, who chooses to focus, not surprisingly, on the first part. And that is the end of THAT four-year relationship.

Meanwhile, Kent, a misogynistic bully, philosophizes with real insight and sensitivity on the female form: “Beautiful women are like athletes: couple of years and then the knees go.” Luckily, the aforementioned new girl at work – whom he is gleefully screwing behind his pregnant wife’s back – is just 23, so, you know, “only starting to fade a bit”.

In sharp contrast to Keiran Bew’s loathsome, thuggish Kent is Tom Burke’s unassumingly intelligent and gently nonchalant Greg – whom LaBute says is "one of the few adults [he’s] ever tackled". Though one does have to question the casting of Steph, as Siân Brooke (pictured, with Burke as Greg), is, by anyone’s standards, pretty bloody gorgeous, she brings a fierce humanness to the role. Billie Piper also impresses as beautiful but none too bright Carly, and her pregnancy has been worked nicely into the script.

This is a morality tale for our age, for our consumerist world of relentless advertising, with its continuous slew of visual messages that let us know exactly how inferior we are as specimens of beauty. LaBute’s warm play shows us how destructive it can be to place such a high value on physical appearance, and how much more important and, yes, attractive it is to act with integrity, decency and kindness.

Also: don’t let your girlfriend think you don’t find her the most beautiful girl on the planet or shit is going to go down.