The End Of The Bendy Bus Is Nigh 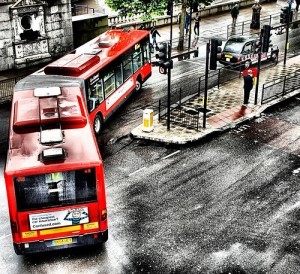 Over the weekend, the number 12 bus, which plies between Dulwich and Oxford Circus, became the latest route to be un-bendyfied. The articulated vehicles were replaced yesterday by a fleet of new hybrid double-decker vehicles.

As of 7th November 2011, there are only three routes on which to ride the bendy bus. But they won't be around for much longer; they'll be scrubbed from the streets by the year's end, months ahead of the mayoral election at which Boris Johnson will be able to trot out his bus policy as a kept promise.

Here's your cut-out-and-keep guide to the beginning of the end of the bendy bus (legal note: Londonist is not responsible for any damage resulting from attempt to cut monitor with scissors)

The demise of the Routemaster in 2005 saw hordes of people lining the streets to bid the much-loved vehicle goodbye, and inspired a whole book on the subject. We suspect the same won't happen to the bendy bus.

Meanwhile, the New Bus for London, Boris' pet project, is gearing up for deployment on the streets next year. Last week the Mayor was in Ballymena, Northern Ireland, to drive the first bus off the assembly line; over at the Guardian, Dave Hill has a video of the momentous occasion. The vehicle will be in the capital next month for testing, before it and a further seven prototypes go into service in February.

What happens after that remains uncertain. If TfL and manufacturer Wrightbus can licence the design to other cities, it could help fund the construction of further vehicles and eventually turn a profit. Or, the cost of construction, added to the additional salaries that staffing the bus with a conductor (a requirement whenever the vehicle is operating with the rear platform open) might tarnish it as the vanity project of a frivolous Mayor, a gambit Ken Livingstone may well adopt as he goes after the incumbent for the sharp rise in fares on London transport.