Listen Up: Christmas With Emmy The Great 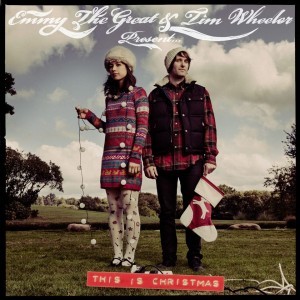 When Londonist found out adopted Londoner Emmy The Great and indiepop heart throb Tim Wheeler were playing a one off Christmas show at Bush Hall on December 14 our hearts swooned with thoughts of snow flakes and fireside jumpers, and we weren’t far off.

Their album, This Is Christmas, evokes thoughts of eggnog parties with friends, rather than battling the Borough Market seasonal crowds. A free download of Christmas Day (I wish I was Surfing) shows that their attitude is more Ramones covering Beach Boys Christmas than a twee Mistletoe and Wine.

This is Christmas is a perfectly thought out album for all the ages, with Christmas Moon echoing the slow number at the end of a 60s dance, and Marshmallow World, originally produced by Phil Spector, pays homage to the Christmas song tradition. Finally here’s a Christmas party record worthy of hipsters, grannies and soundtracks.

On the eve of This Is Christmas’ release Londonist spoke to Emmy (Emma-Lee Moss in the real world) to discuss dream seasonal gigs, best places in London for snowball fights, and surviving Christmas through booze.

What was it like recording with Tim on something for release and not just personal fun?

To be honest, this project was just personal fun pretty much the whole way through. We didn't really know we would make a Christmas album until we were 5 songs in, and then it wasn't until after we finished it that we found someone to put it out. I think that's perhaps reflected on the record. Hopefully it comes across that we were giggling almost all the way through the recording.

Why decide on a Christmas album and not say a blistering Emmy and Tim summer-stravaganza?

How were you able to feel Christmassy when completing the recording at different times of the year?

I think certain words, like sleigh, or santa, just get you in the mood. You're so programmed to feel a certain way when you talk about things like chestnuts or fires. We also rented some Christmas films and listened to Christmas albums.

You took the name Sleigher while recording, why not stick with it for the release?

Because we didn't know if it looked as good on paper as it sounded. It's still Sleigher in our hearts.

Loads! anything by Darlene Love. And Mariah is my guilty pleasure.

Why decide on playing at the Bush Hall?

It's got a great atmosphere, and it's beautiful, and we wanted to make our one Christmas show a really intimate one, where we can interact loads with the audience. Plus there's no noise curfew, so Tim doesn't have to be relegated to an acoustic.

Are you tempted to do the show every year and try and get one up on Slow Club’s annual Christmas show?

We wouldn't dream of going into rivalry with them. They're good eggs.

If you could curate a huge Christmas show anywhere in London, where would it be and who would play?

Wembley. First Tom Waits and Jarvis Cocker would read Christmas stories. Then Elbow would do rock and roll carolling. Then Take That could perform their M&S advert. Then Britney Spears flies down from the ceiling and is placed on the top of a Christmas tree.

Are there any London Christmas shops you could recommend and any other places to visit which make you feel particularly Christmassy?

Liberty's is a comforting, if not always affordable, shout for a classic Christmas environment to shop in. And the Natural History Museum ice rink is properly fun and, if you can get there in the daytime, not that busy.

Growing up as teenager and newcomer to London what was exciting about Christmas in the city?

I guess first the weather, the cold air and the possibility of snow. And then things like Oxford Street and Regent Street, which really come into their own this time of year.

Right, it’s Christmas day and London’s covered in snow, and the Tubes are working fine (yeah right... I know) where would be the best place to go for a snowball fight?

Somewhere where the snow might be vaguely clean, I guess, so it has to be a park, and a hill would be good because you could throw down at people who haven't been smart enough to get to the top. I reckon Parliament Hill or Primrose Hill.

What makes your perfect Christmas and how do you prepare?

Family, alcohol, and getting everything on my list. I prepare by deciding to make something on the day to be helpful, throwing loads of ingredients around, burning it in the oven, throwing it out, and letting someone else clean up.

How will you be spending this Christmas?

This Christmas I'm with my family in Sussex. I'm really excited as we haven't all been together for ages.

Now the seal’s been broken will there be any more Emmy and Tim collaborations?

Any tips on surviving Christmas?

I'm not pushing irresponsible drinking here, but getting on with the entire family, in my family, is entirely reliant on me, my dad and my aunt having lots of wine, and my brother being allowed to slip away to play Fifa every now and then. So my formula is: let everybody do whatever they want to be happy, spend time together, and don't shout at anyone. And if all else fails, cats on YouTube are a great peacemaker.