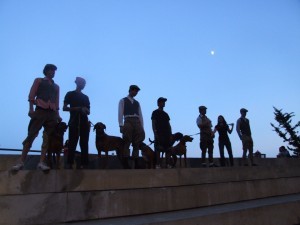 How much fun can you have running around Soho, sniffing lampposts and being chased by dogs? Well, based on playing ‘Hounded’, quite a lot.

Bristol game designers, SlingShot, have unleashed another chase game which sees foxes pitted against their arch foe, the hound. Upon arrival at the Soho Theatre a fox’s tail is pinned to your rear and a scent sprayed on your heels. You are herded into teams, briefed and then taken onto the streets of Soho. The idea is simple, you must follow scent trails laid out across the dense network of streets and text in keywords you find helping you to accruing points. However the huntsmen and their dogs are lurking in the shadows intent on hunting down their quarry. If/when you’re caught you must hand over your tail and become a hound. You can stay with your team but you are now free to hunt down foxes from your rival teams. Once an hour has elapsed the game is over and you return to the start where the team with the most points is declared the winner.

The briefing at the theatre does unfortunately take its time and you cannot help feeling that a theatrical opportunity to exploit the audience’s role as foxes is missed, but it’s on the streets that this game comes into its own. Once released the thrill of the chase kicks in and you find yourself tearing around the streets following the scent pads stuck onto lamp posts. These trails twist and snake through the lanes penned in by major roads on all four sides, providing the perfect hunting ground. This limited area means you can begin to quickly amass points and yet the threat of the hounds is ever present. Once seen the huntsmen and their dogs chase you, barking as you try to escape down blind alleys.

The streets too, full of bemused post work drinks and taxis, are the perfect location (if a little dangerous). As the hour life-span of the chase dies the streets become increasing disorientating and your search for the final trails desperately frantic. As tails are taken the number of hounds on your trail also increases and so before the game is up, if you’re lucky enough to still be a fox, you find yourself peeking around corners and hiding in dark alleys.

The attempt to give the game a political angle, ‘a celebration of the fox as an anti-authoritarian icon’ is unfortunately lost, yet ‘Hounded’ is a thrilling evening of treasure hunting and hide and seek. The game will get your heart pumping and brings a smile to your face long after the scent is lost.