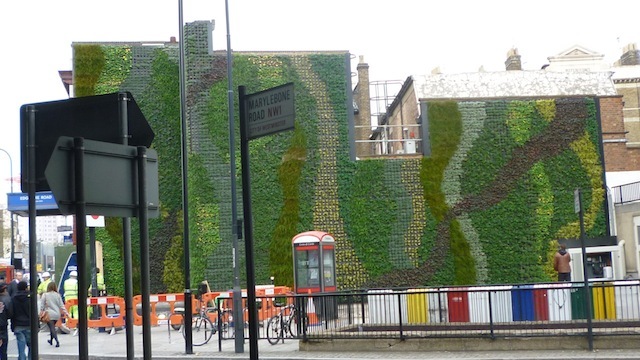 A 200 sq m 'green wall' on the side of Edgware Road Bakerloo Line station is up and growing, not only softening the bleak look of the hugely busy junction but, hopefully, mitigating the effects of air pollution on Marylebone Road.

The wall features 15 varieties of plant that were specially selected for their ability to trap polluting 'particulate matter' and act as air filters. It was pre-grown for 8 weeks in a Sussex nursery before being erected on site, well-established. Come spring, the wall should see a spurt of new growth.

Scientists from Imperial College will monitor the effectiveness of the green wall over the next 18 months in the hope that similar living walls can be rolled out as a cost-effect way to reduce pollution and make the urban environment more green.

The Mayor will be hoping this and other projects financed by the London Clean Air Fund — which is also enabling tree planting projects such as the 50 planted towers on Lower Thames Street and 200 lime trees along the A40 — seriously reduce the level of particulate matter in London's air. Earlier this year the government temporarily dodged £300m in fines for breaching EU limits on air pollution but the situation has not really improved. The environmental audit committee (EAC) of MPs was recently accused of "actively trying to dilute safety standards", in order to avoid fines from the EU for breaches of the rules.

London's air quality is also a 'hot potato' for the forthcoming Olympics.