Should King's Cross Have An Apostrophe?

By M@ Last edited 62 months ago
M@ Should King's Cross Have An Apostrophe? 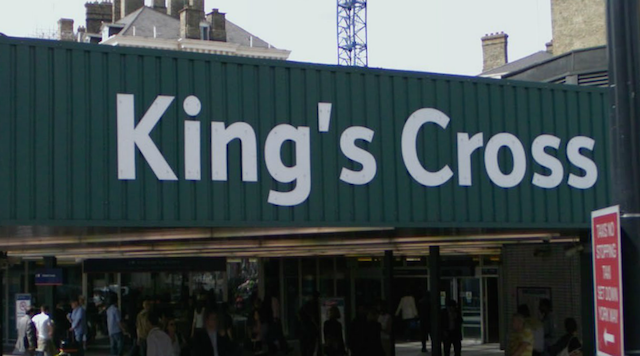 King's Cross, or Kings Cross? Let's take a look at the evidence...

Wikipedia contradicts itself right from the start. Kings in the title, King's in the first line...and then a mixture throughout. Useless.

The Wikipedia discussion area appears to shed more light. "There is no apostrophe in Kings Cross," asserts the very first line. Unfortunately, the supporting reference doesn't load, and most of the subsequent commentary dates from 2002. Balls.

One fact we can rely upon: the mainline station and the underground station both adopt the apostrophe in all official signage (here, for example). But this has only been the case since 1951, before which the station was simply Kings Cross.

Meanwhile, the current A-Z resolutely applies an apostrophe to the area, King's Cross Road and the station, while our battered 1975 copy of the Nicholson Street Finder leaves the punctuation out. Google Maps hedges its bets by offering the two alternatives simultaneously.

Examples of both appellations are also readily found on Camden Council's website, with search results favouring without (2270 instances) to with (1250) – although we can't be sure how sensitive their search engine is to punctuation. The preference is echoed at City Hall, with 373 search results including an apostrophe, and 519 leaving it out.

Meanwhile, the King's Cross Central site – the web home for the major redevelopment of the King's Cross rail lands – emphatically sports a crimson apostrophe in contrast to its otherwise black lettering. Their new road, King's Boulevard, reaffirms this dedication to the mark. Party-pooping Kings Place demurs from the sidelines.

The simple truth is that there is no 'official' stance on the name. Or, if there is, no one pays any attention. While apostrophes are often crucial in written language, they are less important to place names. No one reads 'Kings Cross' and assumes that multiple monarchs must be crossing the street. It's a label and nothing more. If you need a rule, try using an apostrophe when talking about the stations and no apostrophe when describing the area. It makes no sense, but that's often the case with rules.

In fact, the only way we can definitively answer our titular question is to apply it to the popular patisserie chain Apostrophe, in which case, the answer is 'yes' – they do excellent sandwiches and deserve a shop closer to the station than the branch at the Brunswick Centre.

We could expand this piece to discuss the situation elsewhere in London – just taking Tube stations, we have Earl's Court, Queen's Park, Regent's Park, Shepherd's Bush, St John's Wood, St Paul's, and the slightly different case of St James's Park. All offer similar scope for scrutiny. Indeed, most have toyed with apostrophe-free periods, as this article details (PDF). But we'll leave it there for now, and open out discussion in the comments below.