Not one but two Londony knitting books have been released in recent weeks. One records graffiti knitting exploits in the city while the other provides a quirky selection of knitting patterns with which not even the most hardened of Londoners could be uncheered. 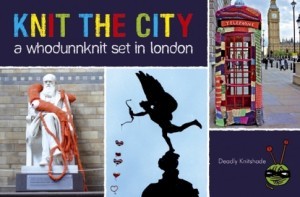 Knit The City, by the eponymous guerrilla knitting corps and the sometimes lone stitcher Deadly Knitshade, is more than a graffiti picture book. The background to yarnstorming (as graffiti knitting is sometimes called), and the passion that drives these sneaky stitchers, are unravelled.

There are pictures of course, lots of them, ranging from simple socks for street furniture to elaborate creations reminiscent of fairytales, in both their cuteness and the occasional tendency to get a bit scary. And all of the projects are wrapped up in the wry words of Deadly Knitshade, who leads the reader by the hand through wonderful scenes of London being made a little brighter and a little woollier. For those who are inspired to take up their needles, there are even a couple of simple patterns to get you started. 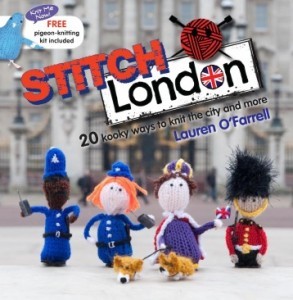 By comparison, Stitch London by Lauren O'Farrell could be described a more conventional knitting book, but that would be doing it a disservice. The patterns range from the practical (e.g., picnic blanket and lap-top socks) to adorable (miniature soldiers and city critters). All have a London bent and are punctuated with tips and quips from O'Farrell (who, it has been said, bears more than a passing resemblance to the aforementioned Ms Knitshade).

The book also holds true to the spirit of Stitch London, the woolly monster of a knitting group that has grown under O'Farrell's guidance over the past five years: a guide to the basics of knitting is included, and the book even comes with the yarn, needles and other gubbins needed to make your very own pigeon called Cooey.

These books show how much fun and how inspiring both knitting and London can be.