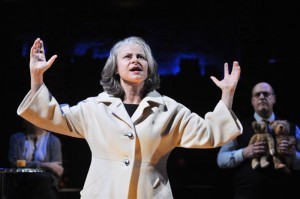 With My City, Stephen Poliakoff makes a return to writing and directing for the theatre after a twelve-year break, during which he has concentrated on TV films, like The Lost Prince, Gideon’s Daughter and, more recently, Glorious 39.

When Richard (Tom Riley) comes across his old primary school headmistress lying on a park bench outside St. Paul’s one night, he is overjoyed to see her – as well as, naturally, a little curious about the whole bench situation – and insists on meeting up with her properly; this time, dragging along his old school friend Julie (an excellent Sian Brooke, recently seen in Mike Leigh’s Ecstasy). For Miss Lambert (Tracey Ullman) was the inspirational teacher who helped them overcome their difficulties as children – Richard, his stammer, and Julie, her dyslexia.

But as Richard tries to get to the bottom of why Miss Lambert walks the streets of London all night, the evening takes a strange turn, and fellow ex-teachers Mr Minken (David Troughton) and Miss Summers (Sorcha Cusack) join them to aid Miss Lambert, like in the old days, in recounting her tales of her experiences on those nightly wanderings: tales of meetings with ghosts at Piccadilly Circus, of walking the tracks of the Underground and of encounters with murderous teenaged sons.

Thrilling stuff, right? No? No.

Though intended as a ‘celebration of the power of storytelling’, Poliakoff’s drama is, unfortunately, really rather dull. Though the actors are talented – especially Ullman as the enigmatic Miss Lambert, and Brooke, whose brilliant turn as Julie accounts for most of the entertainment value of this otherwise tedious production – the play remains self-indulgent and mannered and overly theatrical, refusing to be lifted off the page. At no point are you transported to another world – you remain thoroughly earth- and theatre-bound, constantly aware you’re watching a play. The stories themselves are quite weak and the characters not particularly sympathetic. We were so uninterested in what it is Miss Lambert gets up to on her nightly jaunts, we could have left at the interval. Makes for laborious watching.