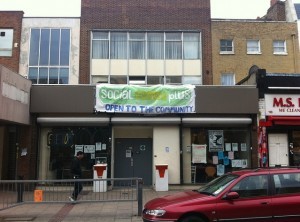 Protestors climbed onto the roof of justice secretary Ken Clarke's Oval home yesterday, in the wake of plans to criminalise squatting.

Unfurling a banner that said "housing is a human right", they wanted to highlight their opposition to a consultation on changing squatting from a civil to a criminal offence in England and Wales, bringing us in line with Scotland. Last week a judge seemed to agree with the protesters' reasoning, requiring Camden Council to release a list of empty homes across the borough. Judge Henderson said

"The tribunal accepts that bringing empty properties back into reuse is a priority for the Government and the council... [publication would] bring buildings back into use sooner and the housing needs of additional people would be met."

The government also accepts that criminalising squatting could lead to a rise in homelessness - in addition to Eric Pickles's department's estimate that 40,000 households could lose their homes in the wake of welfare caps.

Some squats turn into community centres and provide a local service, but the Evening Standard's on a bit of a drive to point out the other side, recently highlighting the case of a doctor and his pregnant wife, whose new home was squatted two days after they bought it. What do you think - reasonable answer to the capital's housing crisis, or nothing but an excuse for criminal damage?