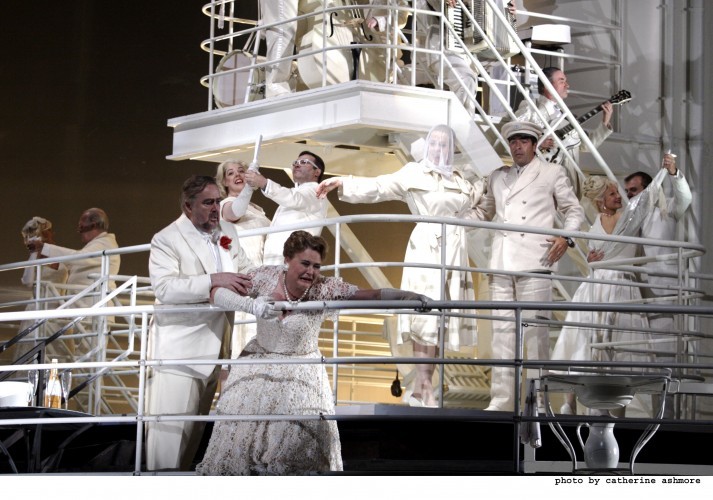 Don’t worry if you have never even heard of an opera called The Passenger. Although composed in 1967 by Mieczysław Weinberg, it was suppressed by the Soviet Union and only received its world premiere at last year’s Bregenz Festival in Austria. Now, however, that the secret is truly out, with English National Opera hosting the UK premiere, we can surely hope that its reputation will spread.

Based on the novel Pasażerka by Holocaust survivor Zofia Posmysz, the opera is set in the early 1960s on an ocean liner that carries German diplomat, Walther, and his wife, Liese, to a new post in Brazil. When Liese thinks she sees Marta on board, a lady whom she believed could only have died in Auschwitz, her own past as an SS overseer is raked up.

In David Pountney’s production, Johan Engels’ set contrasts the trim, white liner of the present with the deadly railway tracks of Auschwitz fifteen years earlier. With the action flitting between the two settings, a staircase joining the two, entering Auschwitz quite literally becomes a descent into hell.

The opera meditates on living in – and surviving – Auschwitz, from the perspective of both oppressor and oppressed.  When Walther learns of Liese’s past his first concern is for his reputation, while Liese’s own proclamations see guilt mixed with self-justification. In the camp we gain personal insights into the characters from numerous backgrounds whom the Nazis simply lumped together as undesirable or sub-human.

Michelle Breedt, Kim Begley and Giselle Allen excel as Liese, Walther and Marta, but the most intriguing aspect is Weinburg’s music itself. It is not quite minimalist or atonal, although those terms provide a general impression, and there are some ‘jazzed up’ moments and passages of searing beauty. It may not be the most accessible score for first time opera-goers, but you will not need to be any type of opera specialist to be bowled over by the potency, or won over by the sheer intensity, of The Passenger.

Photo: The ship looks trim enough, but what horrors lie below? Michelle Breedt and Kim Begley in Weinburg's The Passenger, © Catherine Ashmore