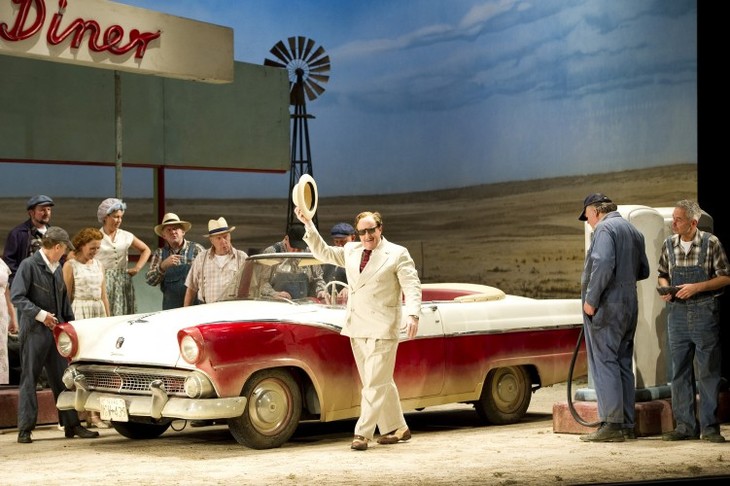 English National Opera's 2011 autumn season opens with a revival of Jonathan Miller's production of Donizetti's The Elixir of Love. As the short, mercurial Overture ends and the curtain rises, we are transported back once again to Adina's diner in nowheresville somewhere in the 1950s American Midwest. If you are feeling short changed by the English summer, you should seriously think of joining the townsfolk in the diner where they gather to shelter from the noonday sun, catching up with their neighbours and watching a little local love story unfold.

The plot is simple as opera plots go. Nemorino, a car mechanic in this production, is madly in love with the smart, sassy Adina but she refuses to be tied down. Then the dashing Sergeant Belcore arrives and woos and wins Adina within minutes. Nemorino turns to the travelling 'world renowned' pharmacist Dulcamara, who has just turned up in town, for an elixir that will make Adina fall in love with him. Dulcamara, snake oil salesman that he is, flogs Nemorino some relabelled wine. Slightly drunk and very confident, Nemorino arouses Adina's jealousy and after a few twists and turns, not to mention some dazzling arias, they end up together.

Sarah Tynan is back as a sparkling Adina; Ben Johnson in his first major role for ENO will steal everybody's heart as the underdog Nemorino - and what a lovely light tenor voice he has. His character grows in confidence, building to his show stopper 'A secret tear' ('Una furtiva lagrima'). He captured the mood shifts between nervousness and hope beautifully and the applause very literally stopped the show. Benedict Nicholson is a dashing Belcore, a far cry from the usual sleazy portrayals.

But it is Andrew Shore who steals the show once more as Dulcamara. The surtitles were turned off for his patter song again and he proved his point by getting every word across. The chorus were in excellent form as the townsfolk. Rory Macdonald conducted with the foot tapping paciness that Donizetti demands, but without losing those orchestral hues that make The Elixir so memorable. (Nik Dasgupta)