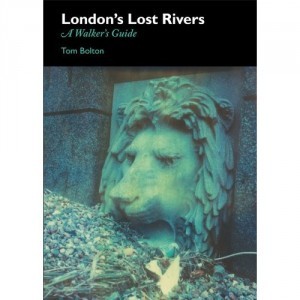 This is the second book called 'London's Lost Rivers' to be released this year, following a similarly shaped guide by Paul Talling back in May. There must be something in the water.

Tom Bolton's handbook to the buried tributaries of the Thames offers a very different take on the subject, however. Where Talling's book surveyed almost 40 watercourses with a punchy combo of colour photos and scatter-gun trivia, his confrere offers a more detailed geographic account of just eight rivers; broad and shallow versus deep and narrow, to put it in riverine terms.

The new book, as its subtitle suggests, is specifically geared up for walkers. As veteran river-hunters ourselves, we can tell the author has put many hours into researching the routes. Almost 20 pages are devoted to the City's Walbrook, for example – a tiny tributary that flows little more than a mile.

Each of the eight walks (four north, four south of the Thames) is backed up with endearing home-made maps, which match the text's precise directions. The text itself is more buoyant than your typical guide book, puddled with allusions to folklore and quoting everyone from Norwood News to Coleridge to the Book of Common Prayer. The cultural magpie approach reflects both the author's sideline in leading tour groups, and the fondness of the publisher, Strange Attractor, for arcane, unusual and 'unpopular culture'. This makes for a cracking read even if you have no intention of pounding the pavements. Fleet, Tyburn, Neckinger, Wandle...you'll lap them up.

The book also contains a rather special collection of colour photographs by SF Said – flame-licked shots of rivers, and things that are not rivers, enigmatically labelled. These, combined with a poetic Foreword by novelist Christopher Fowler add to the magic and mystery of this unorthodox guide.