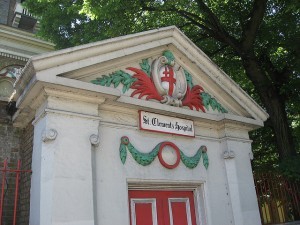 Two stories highlighting London's lack of housing: first, East London Community Land Trust hope to win their bid to turn the old St Clement's hospital in Mile End into affordable homes next week. The Homes and Communities Agency will decide which of the four bidders wins the right to redevelop the listed site, and it's being seen as a test of the government's policy to encourage community land trusts - non-profit organisations working with and on behalf of the community - to develop affordable housing.

The Trust has submitted a £65m plan for the site, which could see two- and three-bedroom homes sell for as little as £100k - well below the national average, let alone the stupid London average (the BBC reports the average price for a flat in Tower Hamlets is currently about £335k). The trust also plans a cafe and splash pool. However, they're up against three other bidders, no doubt with deeper pockets. The Mayor's housing adviser Richard Blakeway has insisted that whoever wins, the community will still "hold the entire freehold", whatever that means. Probably that it's going to private developers.

Second, the Independent has been in Newham discovering people living in so-called "super-sheds". But instead of a big, bright, pottering shed at the bottom of the garden, super-sheds are the latest incarnation of a type of slum that was common in the Victorian era - hastily thrown up dwellings in back gardens and courtyards. They're generally occupied by low earners, sometimes illegal immigrants, who are extremely vulnerable to the whims of their landlord - and the ramshackle structure itself and usual lack of sanitation.

Newham Council and Shelter are working to stamp these slums out but, without real affordable housing in the capital, the risk of landlord exploitation is always going to be there. Critics say Boris Johnson isn't doing enough to tackle the problem - what do you think?

Photo by Kai Hendry under a Creative Commons licence