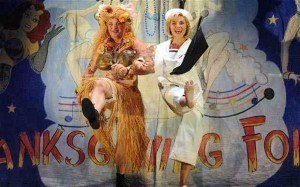 One of Rodgers and Hammerstein’s most popular works, South Pacific combines memorable songs with potent subject matter. Set on two South Pacific islands during the Second World War, the Americans’ need to outwit the Japanese and turn the war around creates an unlikely, though effective, backdrop for some searching explorations into the issues of love, identity and acceptance.

Bartlett Sher’s Lincoln Center Theater Production, which ran in New York for two years, is conservatively staged but high on psychology. With the exception of a backdrop upon which the island of Bali Ha’i magically appears, nothing here could not have been created forty years ago. Famous numbers such as ‘There is Nothin’ Like a Dame’ and ‘I’m Gonna Wash that Man Right out of my Hair’ introduce little that hasn’t been seen before, although they are slickly executed and ensure that the brilliance of the songs shines through.

The real strength of this production lies in its characterisation. By virtue of some intelligent performances we really enter the minds, and feel the pains, of the main protagonists. Samantha Womack is delightful as the US Navy nurse Nellie Forbush, expressing subtle emotions and constantly responding to everything around her. lf Paulo Szot is a little too knowing as the dignified Frenchman, Emile De Becque, his performance is highly engaging and his rendition of ‘This Nearly was Mine’ an undoubted highlight of the evening. Daniel Koek gives another excellent vocal performance as the Lieutenant on a mission, Joseph Cable, while Alex Ferns provides abundant comedy as the maverick ‘Seebee’ Luther Billis. Loretta Ables Sayre is also a splendid Bloody Mary who brings much gravitas to the superficially buoyant ‘Happy Talk’.

Whether this production is for you may depend on what you seek visually from South Pacific or indeed any musical. Speaking for ourselves, however, we found the performances so convincing that our spines were tingling throughout most of Act Two.

Until 1 October (Jason Howard plays Emile from 29 August to 21 September). Tickets: 020 7638 8891 or from the Barbican website. Photo: Samantha Womack as Nellie Forbush and Alex Ferns as Luther Billis © Alastair Muir