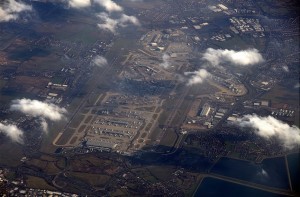 The idea of a Thames airport just will not die, despite plenty of attempts to kill it off. Now Foster + Partners are getting in on the act, preparing to launch a study for a "Thames Hub" combining a new airport, rail freight, tidal energy generation and flood protection.

All this is planned for the Isle of Grain at the edge of Kent's Hoo Peninsula, rather than the middle of the bloody river as Boris Johnson has previously championed. The airport would have four runways, be capable of handling 150m passengers per year (Heathrow dealt with 65.7m in 2010) and be powered by tidal barrage.

Foster has previous for building impressive airports out of nothing – the architecture firm was behind Chek Lap Kok in Hong Kong, constructed on reclaimed land – and their press release contains some persuasive infrastructure arguments. But there's still no explanation for what will happen to the area's birdlife, nor a solution to the airlines' disapproval of moving across town. Plus local councillors have pointed out there's a massive Liquified Natural Gas terminal there. The full study will be out in September – we'll take a look and report back then.

Aerial shot of Heathrow by Manuel.A.69 from the Londonist Flickr pool