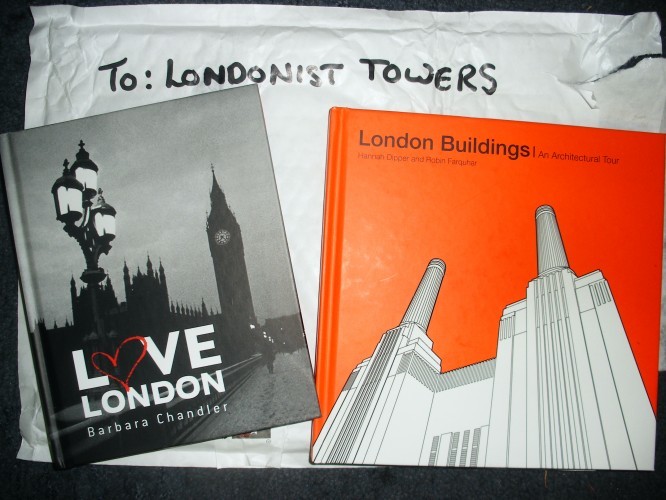 Love it when Mr. Postman brings us stuff other than bills (and Christmas catalogues: yup - it's that time already). And so we nearly hugged him when he brought us not-one-but-two lovely Londony books a few days ago. Both are effectively picture books, which proved pleasingly untaxing for our mid-Summer-addled brains. And they are both, interestingly enough, born out of flourishing card/stationery design businesses.

The first one is Love London, by Barbara Chandler, a professional photographer affectionately tagged the 'granny with a camera in her handbag'. She is also, incidentally, a Londonist flickr pool contributor. So that's the 'who'.

The 'what' is a delightfully uncliched tome of photos and matching (or in some cases mismatching) London words. She snapped our city from all angles, with and without its makeup on, in all seasons and at all times of the day. And she has added snippets of London lore from writers across the centuries. Our favourite, a quote describing London, was this from Ford Maddox Ford:

The great, easy-going, tolerant, loveable old dressing-gown of a place.

At £9.99 we reckon this is one of the most affordable and desirable photographic collections of the capital that we've encountered.

The second book is London Buildings by Hannah Dipper and Robin Farquhar, the guys behind the oddly endearing People Will Always Need Plates. They set up their ceramics company in 2004 to portray and celebrate some of London's most iconic structures by means of stark graphic design: the book is a logical extension of their work.

London Buildings: An Architectural Tour is a must for the doodling architect in your life: its minimal colour ways and crisp lines are just begging to be coloured in (er, or maybe that's just us). The range of forty five buildings is perhaps largely predictable, but there are some pleasing surprises: the inclusion of 66 Frognal and Park Royal Station made us smile. Each image is accompanied by a simple paragraph of explanation. It too comes in at £9.99.

These are both covetable little numbers. And Christmas, rather scarily, is just around the year's corner. Just saying.