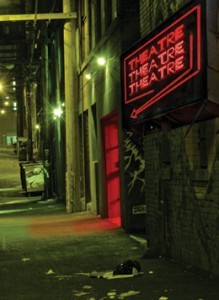 ‘The Theatre Brothel’ is a deceptive name. For those expecting a chance to indulge in fetish theatre or an opportunity to explore their carnal desires the night will most likely be a disappointment.
However, an evening at Greyscale’s experimental take-over of the Almeida is full of curious encounters, a chance to ponder on and see some engaging theatre.

On arrival you are conducted through the Almeida's hidden bowels and led to a brief interview. Here one of the cast members asks a series of questions, (‘sit back or lean forward?’, ‘musical or textual?’), questions which help to reveal your inner desires. From the six possible shows, including ‘What would Judas Do? based on an idea by Stuart Lee, and performance poet Inua Ellams, this mediator will choose two plays which best suit your mood and taste. It’s a bizarre and entertaining encounter which offers a brief chance to consider your theatrical appetite.

Our responses led is to see ‘Tonight Sean Campion Will Lecture, Dance and Box’ and the world premiere of ‘Rhetoric’. Both pieces are penned by Sandy Grierson and centre on the idiosyncratic lives of little known real life characters. In the first, Sean Campion is exuberant and endearing as he lectures on the eccentric Arthur Cravan, a painter, art critic, boxer, con-artist, poet-with- the-shortest-hair-cut-in-the-world and Oscar Wilde’s nephew. It’s a charming tale of one man’s resourceful reinvention and Campion holds the audience is his palm as he asks for their aid in enacting boxing fights and love scenes. Funny and by turns baffling, it’s a surreal exploration of selfhood.

‘Rhetoric’, the story of the young revolutionary mathematician Evariste Galois, follows where the first production left off. Once again the drama unfolds in lecture style, Sandy Grierson and Scott Turnbull setting up the drama with charming ineptitude. Its opening use of mathematics and audience participation is delightfully playful, however as the story unfurls the abstract calculations are in danger of losing the audience. It’s best seen as a work in progress, an ingenious show which requires a little tweaking.

Despite its emphasis on choice and experimentalism ‘The Theatre Brothel’ isn’t as adventurous as it hopes to be. Rather it’s a clever way of presenting new work and mediating the audiences’ experience.

‘The Theatre Brothel’ runs at The Almeida until the 16th July. Tickets from £7.50