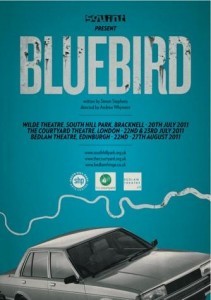 If you look back over the first decade of the 21st century for the new plays that will last beyond their time, the work of Simon Stephens stands out like few others.  His winning streak began with Herons in 2001, and shows no sign of running out any time soon.

He has become Britain’s edgelands poet, telling stories through people living on the fringes, in places that aren’t supposed to matter.  His particular affinity is with off-the-map London: Heathrow hotels and houses under the flight path in Wastwater; an A13 car park in Thurrock in Country Music; a Uxbridge overpass in Harper Regan; the Foulness military zone in Motortown. Stephens seeks out the dislocation behind the modern metropolis, and finds it hidden in corners, easy to ignore.

At the Courtyard Theatre, Andrew Whyment’s Squint company has revived Stephens’ first play, not produced since its Royal Court debut in 1998.  It revolves around Mancunian exile Jimmy (a strong Garry Jenkins), subsisting on pork pies as he drives a parade of strangers around London in his taxi.  The interior of his cab, chassis stripped away, dominates the stage while clubbers, suits, casuals, joggers, workmen and prostitutes pass through its doors.  A series of encounters shows us a city full of collective apprehension and private unhappiness, as the fares tell Jimmy their stories, some more willingly than others.  But we eventually realise that Jimmy’s own story is the darkest of all.

The best scenes in Bluebird are beautifully written, an exciting debut by an author with talent to spare.  A tube engineer complains about the endless light fittings to be mended between Clapham Common and Stockwell, and then reflects that London is full of music, but “one time, long ago, there must have been a silence here.”  A girl forced in prostitution reflects on the beautiful façade and “terrifying” rooms of the Great Northern Hotel.  A stressed-out bouncer talks about what is it like to see someone killed.

Bluebird is also significantly dated, written during the pre-millennial tension era when every new play included discussion of tube suicides, angst about strange weather patterns, and loners asking why everything seems to be “getting a little out of hand”.  Stephens would go on to write many more mature plays, but Bluebird shows us how his central concerns were in place from the very start.  Catch up with Squint at the Edinburgh Festival and travel back in time to London town, 1998 style.

Bluebird was at the Courtyard Theatre for two performances only. It is moving to the Edinburgh Festival, 22-27 August at the Bedlam Theatre.