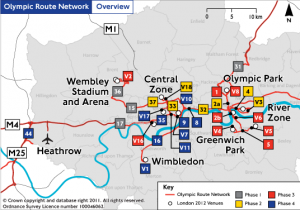 Mayorwatch has printed the full text of the letter from Ken Livingstone to Boris Johnson, which asks for:

The ORN/PRN covers 2.6% of London’s roads and will be kept roadwork free for 2012. Around half of that network is designated for key 'Games Lanes' and, as previously reported, there will be fines for anyone outside of the 'Olympic Family' straying into these vital routes designed to make sure athletes, officials and other VIPs are at the right venue at the right time.

A final 'engagement phase' on the ORN/PRN is due to begin in late summer and be concluded by September this year.

Yesterday BBC London announced a televised public debate, hosted by Jeremy Vine with Mayor Boris Johnson and Lord Coe on hand to answer your questions about the Olympics. The programme will be recorded in Stratford on 25 July and aired the following day. To ask a question, or to be there to hear the debate live, email yourlondon@bbc.co.uk.