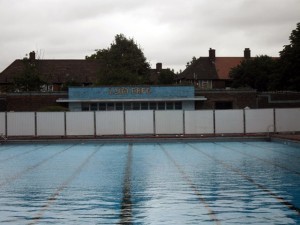 A fortunate swim there last summer before it closed - despite barbed wire, graf, no cafe, scant volunteers and an empty kids pool - showed what a beautiful community facility the 'ravaged Kentish beauty' could, and now hopefully will, be. With mayoral match funding in the bag and plans for a diving centre ditched, it looks like GLL will be able to reopen the lido as London's second 50m heated outdoor pool - south east cousin to London Fields Lido - for summer 2012.

Other facilities to benefit from the Mayor's £12 million boost to grassroots sport in the capital include a controversial new floodlit hockey pitch for Hillingdon and a new karate club for Kingston.

Fourteen 'participation projects' also got good news, particularly Wheelchair Basketball which will be able to open nine new clubs in the capital.