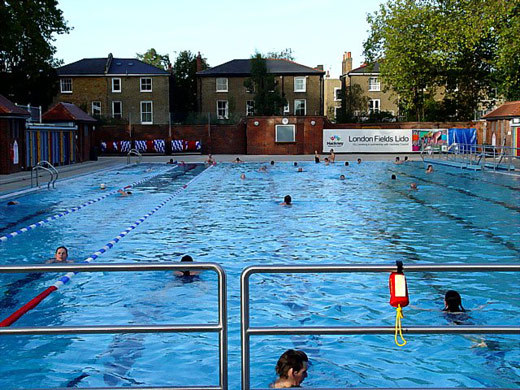 We're giving London's Lidos some love this summer. This week, it's London Fields

Built in 1931 by the LCC, London Fields lido was abandoned in the mid-1980s, when Margaret Thatcher ran a wrecking ball through the GLC and wiped out the majority of London's lidos in the process.

While some (such as the one in nearby Victoria Park) were destroyed, London Fields was left to rot.

Following a lengthy campaign by the London Fields User Group, it was finally re-opened in 2006, and as the capital's sole Olympic-length heated outdoor pool, has quickly justified the money stumped up by Hackney council to convert it into a modern facility.

The lido wears the badges of its transformation with pride: the corridors in the new changing wing are lined with photographs of the dilapidated facilities, which were left exposed to the element for two decades before S & P Architects (the same firm building the 2012 Aquatic Centre) began work in 2005.

The modern re-fit added a new block for changing facilities and administrative offices on the eastern flank, and despite the occasional eccentricity (does anybody know the story of the oddly-placed, non-functional shower head on the outdoor showers?), was an accomplished job.

Nowadays it's operated by GLL, who run it efficiently but strictly — no photography, mobile phones, or topless bathing here, thankyouverymuch.

For eight months of the year, London Fields lido is the paragon of al fresco swimming in the capital, and offers to the aqua-inclined, whether training triathlete or water-winged doggie paddler, a perfect canvas on which to practice.

Those months are, roughly, October to May, when the frigid weather puts off most souls from visiting.

Come summer, the lido gets a little crowded, and the moment the mercury sneaks past 22 degrees, the place turns heaving.

A queue snakes round the block, as the cramped reception area teems and staff struggle to process people through the single entranceway.

Once inside, it's often galling for the swimmer to realise that a hefty percentage of these people have come not to bathe but to pose; the lido's surroundings offer the perfect range to bronze your body on, swimming pool be damned.

Still, for hardier souls the winter months is when the real swimming gets done, and as proof, an exhibition of photographs by Madeleine Waller is currently on display at the lido, showing swimmers before and after their frigid dip.

For the peckish, the doubly-misnamed Hoxton Beach cafe has a range of decent (and, given the captive audience, well-priced) food, with the mezze platter particularly enjoyable. If you're there of a Saturday, the culinary options are augmented by Broadway Market, barely a five minute stroll away.