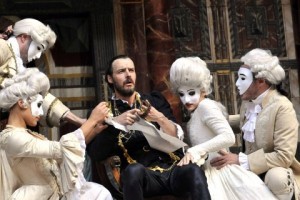 Matthew Dunster directs this production of Marlowe’s take on the famous Faust story: that of the brilliant scholar who, bored with the limitations of human study, turns to the glamour of magic and makes a pact with the devil, promising him his soul in exchange for 24 years of living ‘in all voluptuousness’, with Lucifer’s deputy, Mephistopheles, as his servant.

In its first Doctor Faustus, the Globe stages quite the spectacle, with puppetry and grand costumes in abundance – right down to the feathered musicians. A chorus of scholars clad in black traverse the stage in unison to fairground music, jerked to and fro by their massive tomes like marionettes; towering, horned animal skeletons on stilts, robed from head to foot in fur, lurk threateningly in the background, their eye sockets gaping; while Beelzebub cuts a terrifying figure in leather, standing ready with a horsewhip.

Though the darker side of Dunster’s production is chilling, the humour of its lighter parts falls a little flat at times, confined predominantly as it is to the base comedy of bums and farts, with a good handful of smut thrown in for good measure. It’s all just a bit obvious and clichéd: there’s all the usual ‘cunt…ry’ stuff, which – tediously – seems to be the most risqué thing people can come up with to make Elizabethan drama a bit ‘naughty’. More unusually, they do actually manage to slip in an allusion to, er, camel toe. Comic relief is found in the form of Pearce Quigley, who prances about delightfully as the clownish figure of Robin, with Richard Clews as his aptly named sidekick, Dick, who spends most of the times flailing around anxiously with what appears to be a gigantic salami swinging beneath his breeches.

Arthur Darvill is an amusingly jaded and irritable Mephistopheles to Paul Hilton’s rather blasé Faustus, who has arrogance aplenty, yet remains a little moderate – it’s difficult to believe a man this casual harbours ambition great enough to barter with the devil and damn his soul eternally. At the end of this morality tale, Faustus is, of course, dragged off to hell, repenting of his sin only too late to be saved. But if that sounds a little bleak, fear not: the fantastic and unexpected finale will have you skipping out on to the South Bank with a grin etched ear to ear.