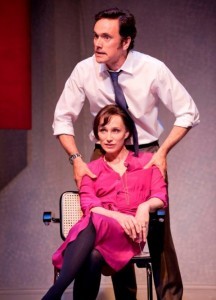 Pinter’s 1978 play tracks the course of the seven-year adulterous affair between Emma and Jerry, beginning in 1977, two years after the love affair has ended, and picking its way backwards over time to the moment in 1968 when it first began. Each scene in Ian Rickson’s excellent production focuses on a particular instance of betrayal in the course of the affair – whether betrayal in marriage, betrayal between friends, or even betrayal between illicit lovers.

Pinter’s clever wit permeates the play and, beneath the guilt, anguish and loss, the multiple layers of fidelity and crossed lines of loyalty between the married adulterers lends it a farcical nature that brings with it great humour. Have you ever been unfaithful? Emma asks. To which Jerry responds, genuinely confused, …To whom? The snappy, naturalistic exchanges are punctuated with Pinter’s long pauses. And rarely have pauses carried greater weight or clarity of meaning than they do in the hands of these faultless actors.

Kristin Scott Thomas is exceptional. She brings an intense emotional vulnerability and great physical truth and precision to the role of Emma. She hides nothing from us. We are privy to each thought that flickers through her mind: her every gesture, her every facial expression vibrates with feeling and declares aloud the workings of her heart. The character of Jerry is passionate, whole-hearted and frank, charmingly naïve at times, and played confidently, with a wealth of emotion, by Douglas Henshall. Ben Miles is the smart, aggressive Robert, a menacing, unpredictable presence (and Pinter’s favourite character of the play) – every word he spits out has a hint of a threat. Yet, he comforts Emma when she’s stricken with guilt, takes her face in his hand and, as you wait for him to strike, strokes her chin affectionately, gently pulls her to him and caresses her.

And that is the beauty of this piece. Its humanness. Its rejection of easy characterisation, of pigeonholing. The characters are very real, well-rounded, multi-dimensional. Sure, Robert may give Emma ‘a good bashing’ every now and then, but Pinter in no way allows us to simply write him off as a bastard. Jerry and Emma may feel tremendous guilt, but it doesn’t stop them revelling in a certain glee in their shared deception as conspirators. Eschewing the clichés of high drama, nothing is obvious or overstated, nothing simple. It remains solidly down to earth, accurate and honest. Powerfully ordinary and truly touching.