The Tube Train Of The Future 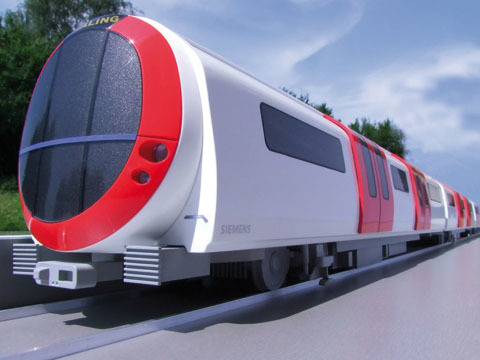 Siemens has unveiled a concept design for the Tube trains that could be scuttling along the Piccadilly and Bakerloo lines in the coming decades, reports Railway Gazette.

And what a concept. The design is marked by a distinctive circular driver's cab, though from what we can see from this image, the side of the train doesn't differ greatly from current deep-level Tube stock. Siemens note that the stock offers 11% more capacity than the new trains currently being introduced on the Victoria line and, like the new sub-surface Metropolitan line trains, would have walkways between the carriages.

According to TfL's pretty useful Tube upgrades website, the Bakerloo and Piccadilly lines will be the last to be upgraded in the current cycle; indeed, the Piccadilly upgrade has been heavily delayed. The preliminary rounds for the next train procurement process doesn't begin until next year, meaning there's plenty of time for this design, or one like it, to be enter the bidding. Let's not hold our breath though.

In other Siemens-related news, the firm has just won the contract to supply the new Thameslink rolling stock.