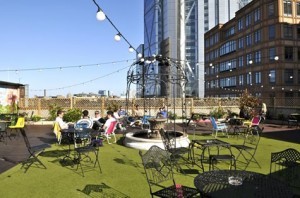 Trendy Shoreditch boozer Queen Of Hoxton shifts some of the hottest movie tickets in town. Its rooftop cinema dates sell out faster than you can hum the Pearl and Dean tune. The mixture of unusual venue, booze and well-chosen mainstream films has proved a big success.

The July programme has now been announced <takes deep breath>: Raiders of the Lost Ark, Big, Taxi Driver, Edward Scissorhands, Butch Cassidy and the Sundance Kidd, Clueless, Breakfast at Tiffany's, Back to the Future, The Big Lebowski, Coming to America, Grease and Saturday Night Fever. Weird Science is also available from the June selection.

Get your tickets here before they're all snapped up. Tickets are £9.