By Londonist Last edited 134 months ago
Londonist London's Other Airports 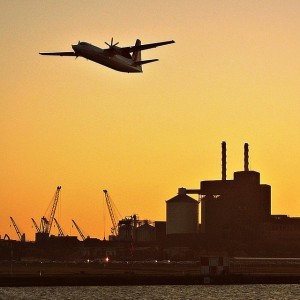 The news that Southend is to join the ranks of London’s chief international airports took many of us by surprise. Not so much due to the addition of another transport hub serving the capital, but rather because we had no idea that Southend possessed an airport. We being, in this case, those too young or ignorant to remember Sir Freddy Laker, New York services and the 1960s days when Southend was the UK's third biggest airport.

Curious about this unknown terminal, we started to wonder how many other secret airports ‘London’ has. The inverted commas are important: the existing ‘London’ airports already stretch geographical rules, with London Luton 28 miles from Trafalgar Square (London’s appointed ‘centre’), and London Stansted even further afield at 31. Only London City and London Heathrow (just) are within the M25 or fall inside Greater London. Perhaps there’s an official mandate on this, or perhaps there’s just an ‘anything goes’ approach – thus explaining how London Birmingham came to be suggested, and subsequently, albeit as a joke, London Southampton. Or perhaps this is London’s 21st century approach to empire?

Foggy rationale aside, some furrowed Googling, plus chats with a few aviation geeks, has led to the following compendium of London’s ‘other’ airports – all potentially the next Southend, if our aviation boom continues apace – plus two bonus balls in the shape of a pair of now-defunct hubs.  Get ready for take off...

London Biggin Hill (15 miles from Trafalgar Square)
Famous for its annual International Air Fair (sadly cancelled last year), when Red Arrows and Typhoons made a real racket over the Kent countryside, Biggin Hill is most renowned for playing a key role during the Battle of Britain, when it was a chief base for fighting off enemy planes. A former RAF airfield, Biggin Hill today operates only private planes and lusty big business jets, resulting in the slightly odd dynamic of slick suits being chauffered through Leaves Green.

Lydd Airport (50 miles)
Also known by its operator's name as London Ashford, Kent airport Lydd does actually operate international flights − the not-quite world-famous Lydd Air takes passengers from here to Le Touquet in France every weekend over summer. And don't you know it was the first UK airport built after the Second World War. Fact.

London Oxford (60 miles)
Also known as Kidlington, this privately owned port is home to Europe's largest air school (you heard) in the Oxford Aviation Academy. Pilot-training is its main hobby, but there are regular dabbles with commercial routes: a 2009 flight to Edinburgh lasted only a week and carrier Varsity Express went bust two months later, while a Saturday-only summer service to Jersey has run the last two years. Plans were announced in February this year for a route to Palma with Eastern Airways.

Farnborough (32 miles)
With an alternative, and distinctly catchy, name of TAG London Farnborough Airport, this Hampshire hub hosts an air show on even-numbered years. It was once the home for His Majesty's Balloon Factory (no, really) but nowadays all civil defence work goes on nextdoor at Cody Technology Park; Farnborough is exclusively reserved for business aviation and, it seems, cinema: both Quantum of Solace and Inception were part-filmed here.

Lasham Airfield (44 miles)
Located near Basingstoke and Alton, Lasham is owned by the Lasham Gliding Society, which probably tells you all you need to know. The Ministry of Defence did once have a presence here, but it sold off its final chunk of Lasham in 2001, and now only 210 gliders merrily remain.

Kent International Airport (65 miles)
Formerly called plain-old Manston Airport, KIA sits way out on Kent's fringes on the Isle of Thanet and, as would-be tacticians might guess, was important during WW2 − and indeed in the Cold War, when the Americans set up camp here. Nowadays, lots of commercial flights use KIA: destinations include Dubrovnik, Verona and Madeira, the latter aboard an airbus. Iran Air use the place as a fuelling stop en route to Tehran (due to disputes in London) and there was even once, not so long ago, a direct flight to Ghana. From Gravesend to the Gold Coast − imagine that.

Fairoaks (22 miles)
Get ready for some glamour: a private airfield north of Woking, Fairoaks is used chiefly as a maintenance centre. Yawn. But there are two training schools here, and even some, er, helicopters. You get the picture? Okay. The real excitement's to be had in finding out who owns Fairoaks − Wikipedia says Albemarle Fairoaks, but in truth it seems to be a bunch of 'front' companies. We smell a compelling TV investigation: someone tell Donal McIntyre immediately.

RAF Northolt (13 miles)
Despite the umpromising name, this Middlesex base does receive the odd private civilian flight. It's also got some seriously funky trivia going on: Northolt is older than the RAF, is the place Princess Diana's body landed and is where Ronnie Biggs was repatriated to from Argentina. Beat that Heathrow! Actually, talking of the big H, during LHR's construction, Northolt was for a while the busiest airport in Europe. It's also another strip with celluloid pretensions, as various Pinewood Studios productions have filmed here.

Duxford Aerodrome (42 miles)
We know what you're thinking: 'wait, but, isn't that a..". So okay, it is − but we refer you to the official website's line: "Imperial War Museum Duxford remains a working airfield to this day". There you go. In its glory days as a squadron base, this Cambridgeshire colossus hosted a Silver Jubilee Review by George VI and played a vital WW2 role, repelling a series of German planes. Fast forward to the next century and Duxford is mainly a museum, although the landing strip does see some Formula 1 testing, plus occasional 'pleasure flights', which are probably less saucy than they sound. (The hashtag you're looking for is #scrapingthebarrel.)

Blackbushe (33 miles)
Sounding more like a pirate than a plane park, Blackbushe is the airport that lost it all. Time was when it welcomed luminaries such as Queen Elizabeth and Dwight Eisenhower, and then became a 1950s commercial mainstay, its fog-free hilltop position proving a key attraction. But in 1960 the pokey Hampshire terminal closed, subsequently re-opening privately. A 1978 music festival, when 200,000 people watched Bob Dylan and Eric Clapton, failed to revive Blackbushe's spirits, and today it is depressingly described as "a British Car Auctions site, a kart track and a small business park", with Sunday markets and nature walks also popular. Fail.

Croydon (closed)
Talkng of glory days, in 1921 Croydon Airport was the first airport in the world to introduce air traffic control. From that mighty distinction, however, its fortunes plummeted: if closure in 1959 (due to an logistical inability to fulfil the capital's need for expansion) was hard to take, the arrival of a Water Palace on the site in 1990 must have had aeronauts nosediving in their grave. Today, Croydon Colonnades Leisure Centre has the spot, with a model plane on the adjacent road's island and a whopping big IKEA nearby.

Heston (closed)
Out near Hounslow, Heston saw brief fame as the place from where Neville Chamberlain thrice departed for talks with Hitler, and from where The Hon Mrs Victor Bruce set off on a record-breaking round-the-world flight. But from the heady days of BA flights, Heston suffered after the war for its proximity to the rapidly expanding Heathrow, and stuttered towards an eventual, final closure in 1978. It's now a combination of housing estates, the M4 and a soon-to-open golf course, called, fittingly, Airlinks.

By Richard Mellor. Image by O.F.E. in the Londonist Flickr pool.