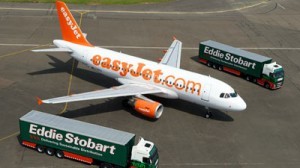 In its (losing) defence to the Advertising Standards Agency in March 2010, the airline said it was "trying to make the point that EasyJet flies to primary airports and Ryanair, in many cases, to secondary airports which are often significantly further away from the city which they serve".

Today, EasyJet announced its 20th base will be at … ‘London Southend Airport’, formerly RAF Rochford.

We’d love them to rename it ‘Eddie Stobart International’ in honour of the haulage company that owns the airport and maybe have a logo of a slack-trousered trucker on the tail of its planes, but the carrier will position three A319 aircraft there from April 2012 to serve ‘up to ten’ destinations: the first announced being Essex-girl favourite Eyebeefa, Faro and Barcelona, closely followed by Amsterdam, Berlin, Belfast, Edinburgh, Glasgow, Madrid and Milan, eight of which are current routes operated from London City Airport.

The airport’s website boasts ‘fast connections to London’ but whilst the new Southend Airport station has been completed and features in the last-published timetable for National Express EastAnglia, trains won’t stop there until more flights are operating.  When they do, there’ll be three an hour from Liverpool Street taking 52 minutes, only 6 more than the Stansted Express, and calling at Stratford, Shenfield and Billericay.

At the moment, only a weekly service to Jersey and Aer Arann’s puddle-jumpers to Galway and Waterford disturb the cattle grazing on surrounding farmland, but a Dutch paper airline named ‘Join’ has big plans for regional European operations linking Southend to Manchester, Caen, Groningen and Cologne/Bonn using aircraft leased from Denim Air.

It’s just looking for an investment of 2.5 million Euro before passing out the hot towels and inflight champagne.