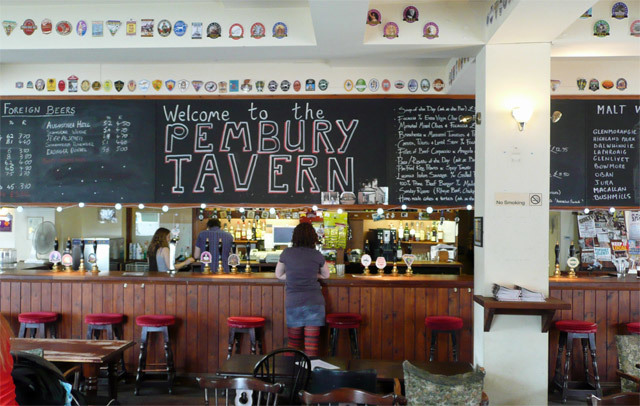 Welcome to our ongoing mission to explore what London has to offer the discerning lover of excellent beer – from pubs and retailers that take pride in the quality of their hoppy offerings, to local breweries and beer events. In this instalment, we drink classically-named beers in Hackney.

At a junction of main roads, a stone's throw away from Hackney Downs, is an imposingly solid-looking 19th-century building that identifies itself as the Pembury Tavern. Closed in the late nineties following a fire, it was refurbished and reopened in 2006 and is now Cambridge-based Milton Brewery's only pub in London.

Wandering in on a Saturday afternoon, we found the large, bright premises furnished with numerous wooden tables that were sparsely populated with drinkers, a couple of local groups hosting 'meetings' and, somewhat incongruously, a well-marshalled group of young children dressed as Cybermen. The place is certainly local-friendly.

Approaching the bar, it was encouraging to see 11 of the 16 available hand-pumps in action, predominantly featuring Milton Brewery beers, but with a handful of guest ales and one cider also available (as well as Moravka unpasteurised lager on keg). The fridges were more focussed on a healthy selection of European, mainly Belgian, bottles. We also counted (or miscounted) 14 whiskies amongst a decent selection of spirits.

The Milton beers mostly lived up to expectations, despite their unconventional names. Marcus Aurelius – a 'Roman stout', allegedly – was suitably strong and coffee-ey, whereas Sparta and Justinian were eminently drinkable session pale ales with crisp flavours. We struggled to categorise Nero; the dark brew seemed to have difficulty deciding whether to be a porter or a stout, or maybe the difficulty was just ours. Dionysus (a vaguely blonde ale, not a defunct kebab house) and Pegasus (a 'best'-style bitter) were a bit anonymous after all that flavour, but that's not always a bad thing.

The guest ales were not too shoddy either. Dark Star Festival was a strong, malty and classic bitter, whereas Bathside Battery from Harwich was a sharp and refreshing pale ale. The best of the non-Milton beers was Tring Brewery's absurdly-named Side Pocket For A Toad – yet another pale ale, but more peachy and sweet than the Battery, with a surprising and intriguing hint of roasted smokiness and the best aftertaste of the afternoon.

The food menu looked pretty decent; we opted for a couple of simple but well-implemented pizzas for beer-soaking purposes, which did not disappoint. Service was effective, although possibly slightly absent-minded – we were unsure if the seemingly competitive drinks prices were deliberate or merely a result of poor mental arithmetic. No complaints either way.

Apart from the abundant joys of the food and drink, additional entertainment was available in the guise of pool and bar billiards tables, as well as a dozen or so board or card games, all in various states of repair. There also seemed to be free wifi, which is always welcome.

Finally, a curious piece of trivia: we're heard persistent rumours that the Pembury's tills run bespoke software that automatically integrates with a stock control system and the pub's website, so that prospective customers have real-time information on which beers are on sale. Top marks for geekiness, if it's true.

The Pembury Tavern was visited by Dave Haste, Jason B Standing and Liz Brock. Words and pictures by Dave.