Have Your Say On District Line Changes 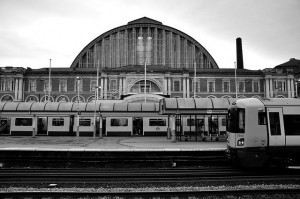 Transport for London are planning to make some changes to the timetable on the District line, but they're soliciting opinion from the public before making any final decision.

The changes concern the three-stop shuttle service that rattles between High Street Kensington and Kensington Olympia (or Kensington (Olympia) as it is known on the Tube map). Around three trains per hour currently make the journey, and rush-hour commuters at Earls Court packed tightly onto a Wimbledon-bound train will doubtless be familiar with the irritating sight of a near-empty Olympia train pulling away from the adjacent platform.

TfL are proposing to scrap the service on weekdays, adding five additional Wimbledon trains during the morning, and one Ealing Broadway train during the evening. The service would continue to operate at weekends and during special events at Olympia, and in any case the station is also served by London Overground and National Rail (it is also the terminus of the little-used parliamentary train, as Ian Visits recently discovered). Baron's Court, West Kensington, and High Street Kensington are all within 15 minutes walk.

Kensington Olympia's existence on the Tube network is something of an anomaly; originally part of the Middle Circle, it was connected to Latimer Road as part of a loop that took in much of the existing Circle line, but bomb damage during World War Two severed that connection. Today it is one of the least used stations in central London, with 1.29m entries and exits in 2010 (by way of comparsion, West Kensington had 4.53m, while Victoria, the busiest on the network, had 79.93m). In fact the busiest day for the station is Sunday, with around 10,000 entries and exits, compared to approximately 2,500 per weekday; as the weekend service will remain operational, many current users of the station wouldn't be affected.

TfL are planning to introduce the changes in December, and you can get involved in the consultation before 15th July.