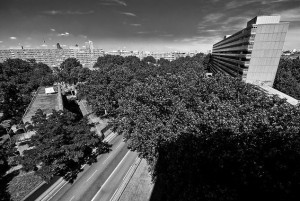 A fierce battle is being pitched in South London to save trees that face the axe as part of the demolition of Elephant and Castle's neo-brutalist Heygate Estate.

The 410 mature trees, which were planted in the 1970s and are valued at £700,000 by Southwark council, are really worth up to £18m, according to campaigners. They want to ensure they are saved as part of the £1.5bn 'regeneration' plan, which will see the destruction of the estate by 2014/15.

A residents' group spent weeks measuring and valuing the trees, using the Capital Asset Value for Amenity Trees system which measures tree stems by square centimetre, and have apparently gained some support from the Forestry Commission for their efforts.

Picture by Gary Kinsman via the Londonist Flickr pool.