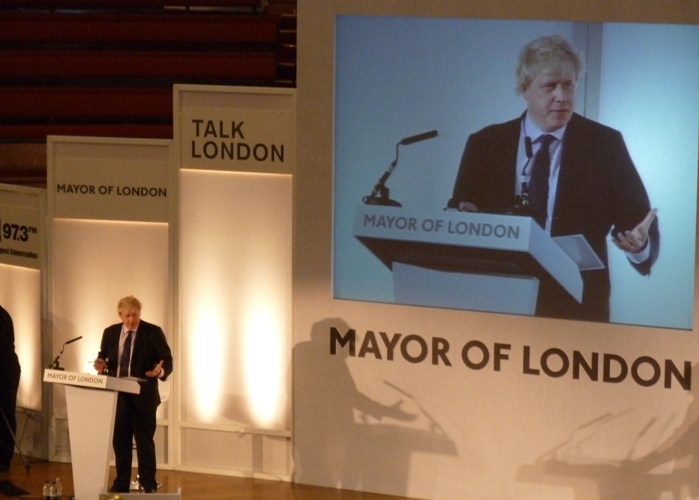 With one eye firmly on next year’s election, the Mayor was grilled on his record in office at a mostly disappointing Question Time-style event at Westminster’s Methodist Central Hall last night.

The Talk London event, hosted by LBC Radio’s showman-presenter Nick Ferrari, touched a wide range of issues affecting the capital. There was too little on the Olympics though and debates about crime levels degenerated into farce with Boris insisting it had dropped, and sections of the audience insisting it had not.

Proceedings were also frequently disturbed by oddballs or by pressure groups who’d come to make just one point. As a result the Mayor was never really seriously challenged. In fact, he looked comfortable throughout: commanding when he was confident on the details and blustering and comic when he was thrown anything difficult.

Here are some of the debate’s highlights:

Transport
- “What’s going on with the Jubliee Line?” came the cry from the floor. “I’m getting medieval with TFL about it,” responded the Mayor. He went on to say that the signalling problems were nearly fixed and that by August, three more trains would run per hour, and by next year, there would be 30 trains an hour on the silver line.

- When questioned about a no-strike agreement on the tube, Boris exclaimed that “I would love to see it”. But he said he couldn’t comment too much further as discussions, which were “positive”, were still ongoing with the unions about a pay agreement.

- When accused of not doing enough to keep down prices on the buses, Boris insisted concessions will stay for the young, old and disabled, come what may.

- Investment in the Thames Gateway Cable Car was questioned in the current economic climate. Denying it was a vanity project, the Mayor said London needed river crossings east of Tower Bridge and said the cable car, due for 2012, would be able to carry 2500 people per hour.

- “It remains a scandal”: the Mayor on foreign embassies that refuse to pay the congestion charge and have racked up millions of pounds in fines. President Obama, however, was apparently unmoved by the Mayor’s appeals.

- A representative for small business owners complained about the coming Low Emission Zone. “We have to improve air quality,” said the mayor, adding that he had delayed the scheme for two years in a bid to lessen the economic impact of the scheme.

Law & order
- Crime is going down, said the Mayor, including 11% for youth crime and the murder rate the lowest it has been for 30 years. However, he did acknowledge that “society does still have a problem” with crime, continuing: “We have been successful in spite of cuts to the police.”

- He wasn’t pushed on crime problems in specific areas unfortunately, but did mention a mentoring scheme in Waltham Forest, which he called one of the “solutions” to gang-related violence.

- A group of London cab drivers had a go at the Mayor about the “rises” in numbers of rapes and sexual assaults in unlicensed mini-cabs. The Mayor, disputing their figures, said the number of attacks was going down. Cue lots of shouting.

- “What gives you the right to overrule common law?” asked one man in relation to the ring-fencing of Parliament Square. This “heritage site was being degraded” retorted Boris, earning one of the evening’s rare cheers.

Housing
- “There is a massive problem with a huge number of people needing affordable housing and we need support from the government,” said the Mayor, looking pleased to be able to attack the Coalition. “London drives the UK economy and we need people to be able to live near their place of work,” he continued.

- A resident from a house-boat community in Battersea complained about property along the river being snapped up by non-UK residents for second homes. Johnson diverted the point shamelessly, deciding to instead trumpet the 50,000 affordable new homes he’s saying will be built in the next three years.

Cuts
- “I love libraries” said the Mayor, before ducking responsibility for library cuts across the capital: “I’ve got a situation in which councils want to make decisions on spending themselves”.