Bikes and the City: The Future Of London's Roads

By BethPH Last edited 125 months ago
BethPH Bikes and the City: The Future Of London's Roads 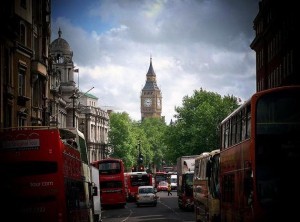 The Mayor’s plans over congestion are under the spotlight again after the London Assembly’s transport committee published a report on the future of the capital’s roads.

One of the key points in the report is a proposed return to a hierarchy of roads users. Ken Livingstone introduced a hierarchy which prioritised cyclists and pedestrians over motor vehicles. Boris Johnson abolished this and its removal has sparked controversy, not least over measures such as the increased speed limit on Blackfriars Bridge. This alone was the subject of furious campaigning from cycle groups and led to the ridiculous walkout by the GLA’s Conservative members during a debate on the issue. While the removal of this hierarchy has been criticised, the report does actually state;

Roads should be thoroughfares which enable all users, whether they are cyclists, motorists, pedestrians, bus passengers, van drivers, taxi passengers or motorcyclists to get from A to B as swiftly and as safely as possible. Neither the Mayor nor the Government should impose an artificial road user hierarchy as this inevitably has the effect of deliberately slowing down some users. Further to this, the Mayor should encourage cycling by emphasising that it is cheap, healthy and quick, not by worsening conditions for other road users.

The last sentence in this paragraph is the elephant in the room here. Opposing supporters of the various forms of transport will always disagree on who gets priority and who should actually have it, but arguably, it’s the imposition of obstructions designed to favour one group of road users above another which contributes to unnecessary congestion. During his tenure as mayor, Ken Livingstone was accused of fettling traffic lights and keeping motorists waiting longer on red to justify the forthcoming congestion charging scheme. Boris Johnson’s pre-election manifesto made much of ‘getting London moving’ and removing these obstructions through rephrasing of traffic lights and introducing lane rental schemes.

Measurement of traffic is also on the to-do list. Currently, TfL don’t have a way of accurately recording numbers of cyclists city-wide, which led some to the conclusion that cyclists outnumbered motorists, a claim questioned by the BBC’s London transport correspondent.

Those staples of every transport policy - charging for road usage and new river crossings in east London are also up for discussion again, both unpopular and previously rejected for different reasons. Road tolls are viewed by the motoring lobby as a punitive measure on a group of road users already paying dearly through high fuel costs and road taxes, not to mention the fact that (as the congestion charge has demonstrated) forcing motorists to pay more is not necessarily a deterrent to driving. Various proposals for an east London river crossing have also been thrown out on cost, location and environmental grounds.

The mayor and TfL are confident they can rise to the congestion challenge though. A spokesperson for Boris Johnson said:

‘The mayor knows exactly how important reducing the burden of congestion is to Londoners and that is why he has made tackling it one of his top priorities. A wide range of measures have been put in place to ease congestion including the rephasing of thousands of traffic lights, a trial of pedestrian countdown crossing timers, the creation of a roadworks permit scheme and a code of conduct for utility companies.’

‘The mayor and TfL are investing billions of pounds to upgrade and increase capacity on London's transport network and smooth traffic flow.’